Kodagu, also known by its anglicised former name of Coorg, is an administrative district in Karnataka, India. It occupies an area of 4,102 square kilometres (1,584 sq mi) in the Western Ghats of southwestern Karnataka. As of 2001, the population was 548,561, 13.74% of which resided in the district's urban centres, making it the least populous of the 30 districts in Karnataka. Kodagu is well known in the world for coffee and its "brave warriors".

Kodagu is home to the native speakers of Kodava language.  According to Karnataka Kodava Sahitya Academy, apart from Kodavas and Kodava Heggade, 18 other ethnic groups speak Kodava Takk in and outside the district including Iri, Koyava, Banna, Madivala, Hajama, Kembatti, and Meda. Though the language has no script, recently German linguist Gregg M. Cox developed a new writing system for the language known as the Coorgi-Cox alphabet, used by a number of individuals within Kodagu.  Lately, some organizations including the Codava National Council and Kodava Rashtriya Samiti are demanding Kodava homeland status and autonomy to Kodagu district.

Must See Places in Coorg, India

Kodagu is located on the eastern slopes of the Western Ghats. It has a geographical area of 4,102 km2 . The district is bordered by Dakshina Kannada district to the northwest, Hassan district to the north, Mysore district to the east, Kannur district of Kerala to the southwest, and Wayanad district of Kerala to the south. It is a hilly district, the lowest elevation of which is 900 metres (3,000 ft) above sea-level. The highest peak, Tadiandamol, rises to 1,750 metres (5,740 ft), with Pushpagiri, the second highest, at 1,715 metres (5,627 ft). The main river in Kodagu is the Kaveri (Cauvery), which originates at Talakaveri, located on the eastern side of the Western Ghats, and with its tributaries, drains the greater part of Kodagu.

In July and August, rainfall is intense, and there are often showers into November. Yearly rainfall may exceed 4,000 millimetres (160 in) in some areas. In dense jungle tracts, rainfall reaches 3,000 to 3,800 millimetres (120 to 150 in) and 1,500 to 2,500 millimetres (59 to 98 in) in the bamboo district to the west. Kodagu has an average temperature of 15 °C (59 °F), ranging from 11 to 28 °C (52 to 82 °F), with the highest temperatures occurring in April and May. The principal town, and district capital, is Madikeri, or Mercara, with a population of around 30,000. Other significant towns include Virajpet (Virarajendrapet), Kushalanagara, Somwarpet and Gonikoppal. The district is divided into the three administrative talukas: Madikeri, Virajpet and Somwarpet. Virajpet is the largest Taluk and comprises the towns Virajpet, Gonikoppal, Siddapura, Ponnampet, Ammathi, Thithimathi etc. 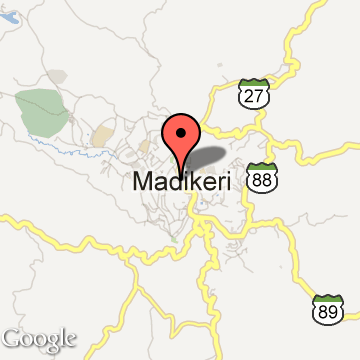