Mysore was the political capital of the Wodeyar dynasty which ruled Karnataka for some 150 years till the independence of the country from the British. The kings, great patrons of art and culture, developed Mysore as an important centre of religion, education and culture. It was the Wodeyars who instituted the tradition of the grand celebration of Dasara festival, the 10-day festivities that celebrated its 400th anniversary in 2010. Today, Mysore is a city of palaces, gardens, shady avenues and sacred temples and retains some of the charm of the old world while stepping into modernity with enthusiasm.

Must See Places in Mysore, India

The site where Mysore Palace now stands was occupied by a village named Puragere at the beginning of the 16th century. The Mahishūru Fort was constructed in 1524 by Chamaraja Wodeyar III (1513–1553), who passed on the dominion of Puragere to his son Chamaraja Wodeyar IV (1572–1576). Since the 16th century, the name of Mahishūru has commonly been used to denote the city. The Mysore Kingdom, governed by the Wodeyar family, initially served as a vassal state of the Vijayanagara Empire. With the decline of the Vijayanagara Empire after the Battle of Talikota in 1565, the Mysore Kingdom gradually achieved independence, and by the time of King Narasaraja Wodeyar (1637) it had become a sovereign state Seringapatam (modern-day Srirangapatna), near Mysore, was the capital of the kingdom from 1610. The 17th century saw a steady expansion of its territory and, under Narasaraja Wodeyar I and Chikka Devaraja Wodeyar, the kingdom annexed large expanses of what is now southern Karnataka and parts of Tamil Nadu, to become a powerful state in the southern Deccan.

The kingdom reached the height of its military power and dominion in the latter half of the 18th century under the de facto rulers Hyder Ali and his son Tipu Sultan. The latter demolished parts of Mysore to remove legacies of the Wodeyar dynasty. During this time, Mysore kingdom came into conflict with the Marathas, the British and the Nizam of Golconda, leading to the four Anglo-Mysore wars, success in the first two of which was followed by defeat in the third and fourth. After Tipu Sultan's death in the Fourth Anglo-Mysore War in 1799, the capital of the kingdom was moved back to Mysore from Seringapatam, and the kingdom was distributed by the British to their allies of the Fourth Mysore war. The landlocked interior of the previous Mysore Kingdom was turned into a princely state under the suzerainty of the British Crown. The former Wodeyar rulers were reinstated as puppet monarchs, now styled Maharajas. The British administration was assisted locally by Diwan (chief minister) Purnaiah. Purnaiah is credited with improving Mysore's public works. Mysore lost its status as the administrative centre of the kingdom in 1831, when the British commissioner moved the capital to Bangalore. It regained that status in 1881 and remained the capital of the Princely State of Mysore within the British Indian Empire until India became independent in 1947.

The Mysore municipality was established in 1888 and the city was divided into eight wards. In 1897 an outbreak of bubonic plague killed nearly half of the population of the city. With the establishment of the City Improvement Trust Board (CITB) in 1903, Mysore became one of the first cities in Asia to undertake planned development of the city. Public demonstrations and meetings were held there during the Quit India movement and other phases of the Indian independence movement.

After Indian independence, Mysore city remained as part of the Mysore State, now known as Karnataka. Jayachamarajendra Wodeyar, then king of Mysore, was allowed to retain his titles and was nominated as the Rajapramukh (appointed governor) of the state. He died in September 1974 and was cremated in Mysore city. Over the years, Mysore became well known as a centre for tourism; the city remained largely peaceful, except for occasional riots related to the Kaveri river water dispute.Among the events that took place in Mysore and made national headlines were a fire at a television studio that claimed 62 lives in 1989, and the sudden deaths of many animals at the Mysore Zoo. 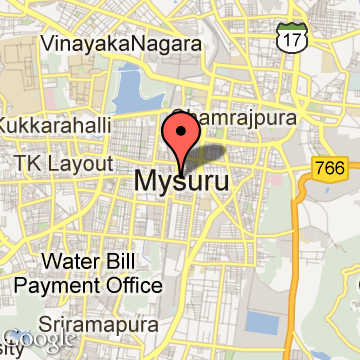