A relaxed and laid-back town, Hassan is the headquarters of the same-named district and is one of the all-time favourite spots in the state of Karnataka. Named after the town's presiding Goddess "Hasanamba", Karnataka's fourth largest city is mainly a farmer and trader town. Hassan is a pleasant place to explore for a day or two on foot and forms a perfect base for exploring the world-famous site of Halebid (33km), Belur (38km) and Sravanabelagola (48km).

Hassan is best known for its Hasanamba Temple, but there's also Siddeshvara Temple, built by Venkatappa Nayaka, one of the Nayaka rulers.

Must See Places in Hassan, India

Hassan, the main city in the Hassan district,which has an area of 6814 km2 dates back to the 11th century, during the Hoysala dynasty, which lasted from the eleventh to the fourteenth century. Their capital was at Dwarasamundra (Dwaravati-pura), the ruins of which are still to be seen scattered round the town of Halebidu(ಹಳೆಬೀಡು).

The earlier kings were of the Jain faith, but the finest temples were dedicated to Shiva by the later monarchs in the dynasty. While the Hoysalas were at the zenith of their power, much of southern India was under their influence.

Belur is one of the famous tourist place near Hassan. Belur was the early capital of the Hoysala Empire. With Halebidu which is only 16 km away, this is one of the major tourist destinations in Karnataka, India. The main attraction in Belur is the Chennakesava temple complex which contains the Chennakesava Temple (dedicated to Chennakeshava, meaning handsome Vishnu) as the centre piece, surrounded by the Kappe Chennigraya temple built by Shantaladevi, queen of king Vishnuvardhana.

Shravanabelagola is a city located in the Hassan district in the Indian state of Karnataka and is 158 km from Bangalore. It is one of the most important Jain pilgrim centers. It reached a peak in architectural and sculptural activity under the patronage of Gangas of Talakad.The 57 feet monolithic statue of the Bhagavan Gomateshwara Bahubali is located on the Vindyagiri. It is considered to be the world's largest monolithic stone statue and was erected by Chavundaraya, a general of King Gangaraya. The base of the statue has an inscription in Prakrit, dating from 981 AD. Every twelve years, thousands of devotees congregate here to perform the Mahamastakabhisheka, a spectacular ceremony in which the statue is covered with milk, curds, ghee, saffron and gold coins. The next Mahamastakabhisheka will be held in 2018. 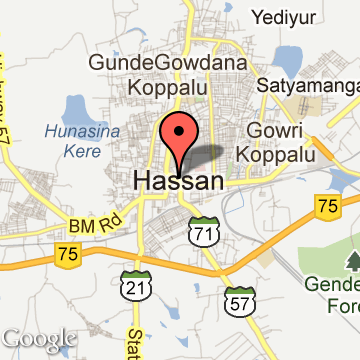