Gulbarga is located in the northeastern part of the state of Karnataka, in the southern region of India. It is 663 km from Bangalore city and 214 km from Hyderabad city. Gulbarga is 613 km north of Banglore is the district headquarters of Gulbarga. A Hindu city before the Muhammadan conquest, Gulbarga is a unique synthesis of two cultures. When Bahman Shah ascended the throne of Daulatabad, it was this city that he chose as his capital. He filled it with beautiful places, mosques, stately buildings and bazaars. he later rulers added to Bahman shah's vision and Gulbarga blossomed. Gulbarga still retains its historic charm.The climate of Gulbarg is temperate with summers (April-June) being moderately hot and winters are cool (November-February). It experiences southwestern monsoon rains in the months of May to July.

Must See Places in Gulbarga, India

In the 6th century, the Rashtrakutas gained control over the area around present-day Gulbarga, but the Chalukyas regained their domain and reigned for over two hundred years. Around the close of the 12th century, the Yadavas of Devagiri and the Hoysalas of Halebidu took control of the district. The present Gulbarga District and Raichur District formed part of their domain.

The city of Gulbarga was founded by the Bahmani Sultans in the 14th century as their capital. The northern Deccan, including the district of Gulbarga, passed under control of the Sultanate of Delhi. The revolt of the officers appointed from Delhi resulted in founding of the Bahmani Sultanate in 1347 by Hassan Gangu, who chose Gulbarga (Ahsenabad during this period) to be his capital.

From 1724 to 1948 Gulbarga was part of Hyderabad state ruled by the Nizams. It was integrated into India in September 1948 after the Indian army defeated the Nizam. Gulbarga means "place of flowers and petals" in poetic Persian. Gulbarga district is situated in the northern part of Karnataka State. In the earlier days, Gulbarga was a district of Hyderabad Karnataka area and became a part of Karnataka State after re-organization of states.

Recorded history of this district dates back to the 6th Century A.D. The Rashtrakutas gained control over the area but the Chalukyas regained their domain within a short period and regained supreme for over two hundred years. The Kalaharis who succeeded them ruled till the 12th Century AD. Around the close of the 12th century.

The Yadavas of Devagiri and the Hoysalas of Dwarasamadra destroyed the supremacy of the Chalukyas and kalachuris. About the same period the kakatiya kings of Warangal came into prominence and the present Gulbarga and Raichur districts formed part of their domain. The Kakatiya power was subdued in 1321 AD and the entire Deccan including the district of Gulbarga passed under the control of the Emperors of Delhi.

The revolt of the officers appointed from Delhi resulted in founding of the Bahmani kingdom in 1347 AD, by Hassan Gangu who chose Gulbarga to be his capital. When the Bahmani dynasty came to an end, the kingdom broke up into five independent Sultanates and the present Gulbarga district came partly under Bidar and partly under Bijapur.

With the conquest of the Deccan by Aurangezeb in the 17th century, Gulbarga passed back to the Mughal Empire. In the early part of the 18th century when Mughal Empire was declining Asaf Jha a general of Aurangzeb became independent and formed the Hyderabad State in which a major part of Gulbarga area was also included. In 1948 Hyderabad state became a part of Indian Union and in 1956, excluding two talukas which were annexed to Andhra Pradesh the remaining talukus of Gulbarga district became part of New Mysore State.

Gulbarga is 613 km north of Bangalore and well connected by road to Bijapur, Hyderabad and Bidar. Train from southern part of India to Mumbai and Delhi passes through Gulbarga. The government has given green signal for airport. The Airport is under construction near a village called Srinivas Saradagi). Shri Kshetra Gangapur a well known pilgrimage place for devotees of God Shri Sadguru Dattarya is very close from Gulbarga. The climate of the district is generally dry with temperatures ranging from 5c to 45c and an annual rainfall of about 750mm. The entire district is situated in Deccan Plateau and the general elevation ranges from 300 to 750 meters above MSL.

Two main rivers, Krishna and Bhima, also flow in the district. The predominant type of soil found in the district is black soil. The district has a large number of tanks which in addition to the rivers irrigate the land. The Upper Krishna Project is major irrigational venture in the district. Jowar, groundnut, rice, and pulses are the main crops. Gulbarga is the highest producer of toor dal or pigeon pea in Karnataka. Gulbarga an industrially backward district is presently showing signs of growth in the Cement, textile, leather and chemical industries sectors. Gulbarga has a University with Medical and Engineering Colleges.

This town was the Bahmani capital form 1347 until its transfer to Bidar in 1428 Later the kingdom broke up into a number of smaller kingdoms - Bijapur, Bidar, Berar, Ahmednager and Golconda. The last of these, Golconda, finally fell to Aurangzeb in 1687. Gulbarg's old moated fort is in a much deteriorated state, but it has a number of interesting buildings inside including the Jama Masjid, reputed tohave been built by a Moorish architect during the late 14th or early 15th century who imitated the great mosque in Cordoba, Spain. The mosque is unique in India, with a huge dome covering the whole area, four smaller ones at the corners, and 75 smaller still all the way around. The fort itself has 15 towers. Gulbarga also has a number of imposing tombs of Bahmani kings, a shrine to an important Muslim saint and the Sharana Basaveshwara Temple. 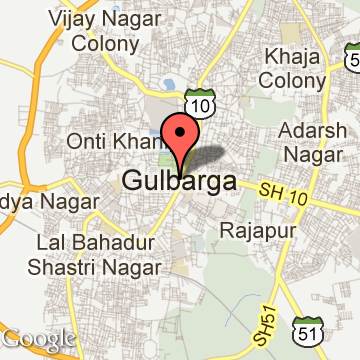