Flanked by hillocks on both sides, Angul the headquarters town of the district of same name, is beautifully carved on an open plain with a garlanding road. It has come to the limelight with the establishment of National Aluminum Company Ltd. (NALCO), the largest in Asia. As an important road junction, Angul serves the ideal base for visiting the places of interest in its neighbourhood.

Must See Places in Anugul, India

A bridge between western and coastal areas of Orissa where the prehistoric and protohistoric relics are found in village Bhimakund, Kankili, Kulei, Samal, Sanakerjang, Kaliakata, Paranga, Kerjang, Ogi, Tikarapara and Pallahara. The geographical location of Angul made the Bhanjas of Angulaka-pattana, the Sulkis of Kodalaka Mandala, the Nandodbhavas of Airavatta Mandala, the Tungas of Yamagartta Mandala rule over it. But all through the rules of different dynasties, Angul has retained her cultural identity which is much more prominent than its political establishments.The Bhaumakaras declined by the middle of the 10th Century AD when the eastern part of Orissa including the Dhenkanal region passed to the hands of the Somavamsis of South Kosala. The Somavamsis in their turn, were ousted by the Gangas and Orissa was occupied by Chodagangadedva some time before 1112 AD. The Ganga rule lasted as long as till 1435 AD when a new Solar dynasty founded by Kapilendradeva came to power. About the year 1533-34, Govinda Vidyadhar put an end to the Suryavamsi rule and started the rule of Bhoi dynasty, which lasted up to 1559 when Mukundadeva, belonging to the Chalukya family, forcibly occupied the throne. In 1568, the Afghans of Bengal invaded Orissa, and defeated and killed Mukundadeva after which Orissa came under their occupation. During all this period of dynastic changes, Angul played no remarkable role in history and this territory simply passed from one political authority to the other. During the rule of Suryavamsis and the Bhois & subsequently some new feudal states developed as self-contained political units. These are Angul, Talcher, Pallahara and Athamallik. Somanath Singh was the last king of Angul and he ruled for a long period of 33 years from 1814 to 1847 when he was deposed by Government. He was a spirited and a head-strong ruler and although ruled his territory with considerable efficiency, he incurred displeasure nor only among the neighbouring Feudatory Chiefs of Dhenkanal, Hindol, Daspalla, Baudh, and Athmallik but also among the British Officers by his head-strong dealings and outspoken nature. His State was confiscated by the Government in their Resolution, dated 16 September 1848. Angul thus passed under the direct rule of the British and was administered by the Superintendent of the Tributary Mahals, through the agency of an officer known as Tehsildar, who collected revenue and administered justice, until in 1891 when Angul was constituted a separate district.This district was formally formed out of the former undivided Dhenkanal district on the date of April 1, 1993 by the late Chief Minister of Orissa, Mr. Biju Patnaik. 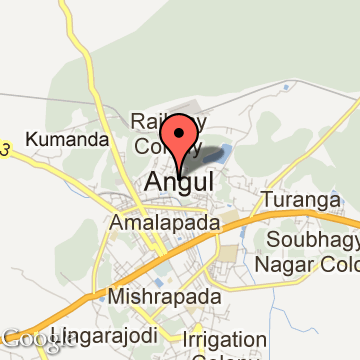