Located on the banks of Jhelum in the heart of the Kashmir valley, Srinagar is very much a niche tourism town, attracting a steady flow of tourists from all parts of India and abroad. A travel to the summer capital of Jammu and Kashmir is a fairytale panoramic tour through the mountains where nature is both the backdrop and the director. The beautiful placid mountain-backed Dal and Nagin lakes, the unique accommodation in houseboats, the blossoming gardens and the waterways with their own quaint lifestyle make Srinagar a paradise for holidaymakers and nature lovers. The city is also the base to enjoy some of the best hiking, mountain biking, river rafting opportunities in India.

Must See Places in Srinagar, India

Srinagar has a long history, dating back at least to the 3rd century BC, and has been known by different names. The city was founded by the King Pravarasena II over 2,000 years ago, named it Parvasenpur. The city was then a part of the Maurya Empire, one of the largest empires of the Indian subcontinent.Ashoka introduced Buddhism to the Kashmir valley, and the adjoining regions around the city became a centre of Buddhism. In the 1st century, the region was under the control of Kushans and several rulers of this dynasty strengthened the Buddhist tradition. Vikramaditya (of Ujjain) and his successors probably ruled the regions just before the city fell to the control of the Huns in the 6th century, and Mihirkula was the most dreaded ruler of the city and the valley.

Srinagar became the capital of Kashmir around 960 CE. Some of the notable independent rulers were Lalit Aditya, Avantiverman and Sangrama Deva. The independent Hindu and the Buddhist rule of Srinagar lasted until the 14th century when the Kashmir valley, including the city, came under the control of the several Muslim rulers, including the Mughals. It was also the capital during the reign of Yusuf Shah Chak, an Independent Kashmiri ruler who was tricked by Akbar when Akbar failed to conquer Kashmir by force. Yusuf Shah Chak remains buried in Bihar in India. Akbar established Mughal rule in Srinagar and Kashmir valley.

With the disintegration of the Mughal empire after the death of Aurangzeb in 1707, infiltrations to the valley from the Pashtun tribes increased, and the Durrani Empire ruled the city for several decades. Maharaja Ranjit Singh of Punjab province annexed a major part of the Kashmir Valley, including Srinagar, to his kingdom in the year 1814 and the city came under the influence of the Sikhs. In 1846, the Treaty of Lahore was signed between the Sikh rulers and the British in Lahore. The treaty inter alia provided British de-facto suzerainty over the Kashmir Valley and installed Gulab Singh as an independent and sovereign ruler of the region. Srinagar became part of his kingdom and remained until 1947 as one of several princely states in British India. The Maharajas choose Sher Garhi Palace as their main Srinagar residence.

After India and Pakistan's independence from Britain, certain Pashtun tribes such as Mehsud and Afridi from mountainous region of North-West Frontier Province (NWFP) of Pakistan, at the instigation of Pakistan and with its collusion, entered the Kashmir valley to capture it.

The Maharaja signed the instrument of accession on 26 October 1947 which was accepted by India the next day. The government of India immediately airlifted Indian troops to Srinagar, defended the city and drove away the invaders.

The city has suffered from severe political and terrorist unrest during the last decades. Kashmiri separatists have clashed with Indian Army on some occasions. The city is heavily militarized. 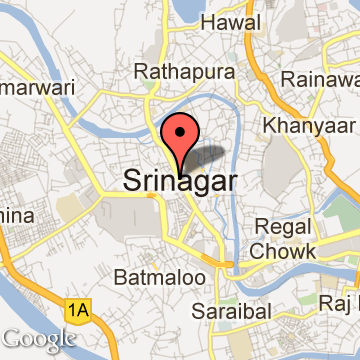