Beerwah is a oldest Tehsil and Largest Constituency (interms of voters) and a town and a Municipal area committee in Budgam district of the Indian administered Kashmir of Jammu and Kashmir. kashmir Valley

Beerwah is at an height of 5200 feet above sea level. It can be identified between 75° E longitude and 34° N latitude at the base of Pir Panjal Mountain range base.The famous markets of the Beerwah Constituency are Magam,Beerwah,Narabal

Beerwah is located between plains (to the north and eastern part and to the south and south-western part). The beautiful landscape comprises elevated table lands known as "Karewas" given by Godwin-Austin (The British Geologist) first time during 1859. The name Beerwah means "beautiful" in Sanskrit, derived from springs of beerwah known as "Behroop" also means "beautiful".

In 1766 A.D., a Fort was built by the then Muslim Governor - Lal Mohammad Khatak. This fort was repaired in 1801 A.D. by Governor Abdullah Khan but unfortunately the fort was destroyed completely in 1884 A. D. in an earthquake.

Beerwah served as Pargana during mughal reign. It was formed out of the erstwhile of Srinagar district, achieving Tehsil status in 1962 and the man behind the formation was Sir Syed Sani Mawlana Syed Ali Shah Bukhari,making it one of the oldest tehsil headquarters of kashmir. The Budgam, Beerwah and baramullah were connected with tehsil Beerwah and it was called Tehsil Ranbir Singh.It was the headquarter and tehsil of Beerwah, budgam and Baramullah). The tehsil budgam was formed later in 1979, and henceforth achieved district status with the help of chief Minister Sheikh Mohammed Abdullah.

Must See Places in Beerwah, India

This is not only famous as a pasture but also for its historical bacKground. Bounded by dense forests, it is situated about 10 km from Khag in the mountains of the Himalayan range. After crossing the upper mountain reaches of Drang, Zakhora and other small villages, one reaches the pasture of Tosamaidan. It is one of those pastures which the shepherds of other countries also used to visit in ancient times. The Mughals used to go to Poonch using this route. It is said that they had constructed a seven-storeyed building - Dam Dam - here. The Basmai Gali (13,000 ft) is the pass which leads into Tosamaidan. Another pass - Poonch Gali - on its right side leads to the valley of Poonch. This pass was deemed to be the safest, easiest, and nearest to reach Punjab in ancient times. From here a path also leads to Nilnag. Tosamaidan is the largest pasture in its surrounding areas, 3 miles in length and 1.5 miles in width. Sky touching deodars fence this pasture presenting a view of a green carpet during summer. During summer, the camps of the Gujjar community and shepherds are grazing their sheep in the pasture presenting a riveting look. Also, the fragrance of wild flowers refresh the environment. 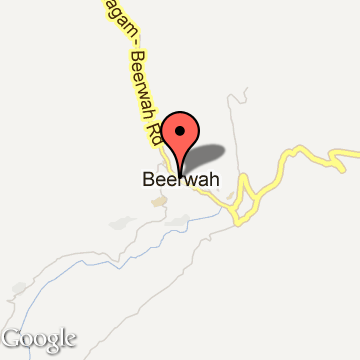