Gulmarg is a town and a notified area committee in Baramula district in the Indian state of Jammu and Kashmir. Gulmarg`s legendary beauty, prime location and proximity to Srinagar naturally make it one of the premier hill resorts in the country. It is one of the ultimate adventure zones of the Kashmir valley.

Originally called `Gaurimarg` by shepherds, its present name was given in the 16th century by Sultan Yusuf Shah, who was inspired by the sight of its grassy slopes emblazoned with wild flowers. Gulmarg means "Meadows of Flowers".

The journey to Gulmarg is half the enchantment of reaching there-- roads bordered by rigid avenues of poplar give over to flat expanses of rice fields interspersed with quaint villages. Depending on the season, nature`s colours could be translucent green of spring, summer`s rich emerald, or autumn`s golden hues, when scarlet chillies festoon windows of village homes. After Tangmarg, the climb to Gulmarg begins through fir-covered hillsides. At one point, known simply as View Point, travellers generally stop their vehicles for few minutes to look out to a spectacle of snow-covered mountains, almost within touching distance.

Golf Courses in Gulmarg: Situated at an altitude of 2,650 m, Gulmarg has got the highest green golf course in the world. The layout of the course is quiet striking and the layout is similar to a normal golf course with land slopes and inclines along the complete area of the course, which has a par of 72. The British who used Gulmarg as a holiday resort, and opened it for golf lovers in the year 1904 started the golf club. At present the Jammu & Kashmir Tourism Development Corporation manages the club.

Must See Places in Gulmarg, India

Gulmarg was a favourite haunt of Emperor Jehangir who once collected 21 different varieties of flowers from here. Today Gulmarg is not merely a mountain resort of exceptional beauty- it also has the highest green golf course in the world, at an altitude of 2,650 m, and is the country`s premier ski resort in the winter.

British discovered the hill resort of Gulmarg in 1927 during their colonial rule in India. Gulmarg is a hill station in the Indian state of Jammu and Kashmir. The town had witnessed militancy in the 1990s, but after a ceasefire between India and Pakistan in 2003, the town is now peaceful. 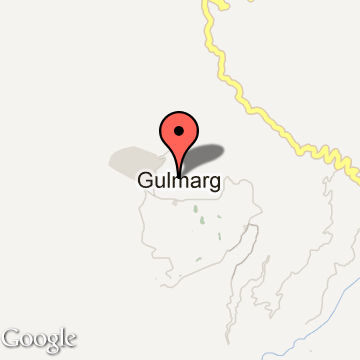