Kargil, the headquarters of the district of the same name, is around 204 km to the east of Srinagar and is the second largest town of Ladakh. Situated at an altitude of about 2,704 meters, Kargil, apart from its importance as a link town to Leh, is an important base for trekking to surrounding areas of the Suru valley, Drass valley and Zanskar region.

Before Indian independence, the place was an important trading post for caravans travelling between Zanskar and Baltistan. Tourists traveling between Zanskar, Leh and Srinagar have to make right halt here, before starting second day of their journey.

Must See Places in Kargil, India

After the Indo-Pakistani War of 1971, there had been a long period with relatively few direct armed conflicts involving the military forces of the two neighbors – notwithstanding the efforts of both nations to control the Siachen Glacier by establishing military outposts on the surrounding mountains ridges and the resulting military skirmishes in the 1980s. During the 1990s, however, escalating tensions and conflict due to separatist activities in Kashmir, some of which were supported by Pakistan[citation needed], as well as the conducting of nuclear tests by both countries in 1998, led to an increasingly belligerent atmosphere. In an attempt to defuse the situation, both countries signed the Lahore Declaration in February 1999, promising to provide a peaceful and bilateral solution to the Kashmir conflict.

During the winter of 1998 -1999, some elements of the Pakistani Armed Forces were covertly training and sending Pakistani troops and paramilitary forces, some allegedly in the guise of mujahideen, into territory on the Indian side of the LOC. The infiltration was code named "Operation Badr"; its aim was to sever the link between Kashmir and Ladakh, and cause Indian forces to withdraw from the Siachen Glacier, thus forcing India to negotiate a settlement of the broader Kashmir dispute. Pakistan also believed that any tension in the region would internationalise the Kashmir issue, helping it to secure a speedy resolution. Yet another goal may have been to boost the morale of the decade-long rebellion in Indian Administered Kashmir by taking a proactive role.

Pakistani Lieutenant general Shahid Aziz, and then head of ISI analysis wing, has confirmed there were no mujahideen but only regular Pakistan Army soldiers who took part in the Kargil war. "There were no Mujahideen, only taped wireless messages, which fooled no one. Our soldiers were made to occupy barren ridges, with hand held weapons and ammunition," Lt Gen Aziz wrote in his article in the The Nation daily in January 2013.

Some writers have speculated that the operation's objective may also have been as a retaliation for India's Operation Meghdoot in 1984 that seized much of Siachen Glacier.

According to India's then army chief Ved Prakash Malik, and many other scholars, much of the background planning, including construction of logistical supply routes, had been undertaken much earlier. On several occasions during the 1980s and 1990s, the army had given Pakistani leaders (Zia ul Haq and Benazir Bhutto) similar proposals for infiltration into the Kargil region, but the plans had been shelved for fear of drawing the nations into all-out war.

Some analysts believe that the blueprint of attack was reactivated soon after Pervez Musharraf was appointed chief of army staff in October 1998. After the war, Nawaz Sharif, Prime Minister of Pakistan during the Kargil conflict, claimed that he was unaware of the plans, and that he first learned about the situation when he received an urgent phone call from Atal Bihari Vajpayee, his counterpart in India. Sharif attributed the plan to Musharraf and "just two or three of his cronies", a view shared by some Pakistani writers who have stated that only four generals, including Musharraf, knew of the plan. Musharraf, however, asserted that Sharif had been briefed on the Kargil operation 15 days ahead of Vajpayee's journey to Lahore on February 20. 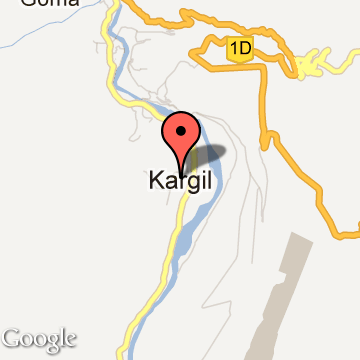