Nilambur is a town that is located in the Malappuram District in the State of Kerala. It is famous for its forests and natural beauty. The place has many natural waterfalls and rivers and it is surrounded by greenery for many months of the year. The place is situated near the Nilagiri Hills and the Chailyar River runs near the town of Nilambar.There are many tea plantations located in the town and driving through the plantation, which is a popular tourist attraction, can be pleasant. The place also has the oldest teak plantation in the world and this is called Connolly’s Pot. There is a temple called the Nilambur Kovilkulam which is a popular place and many festivals are held in the temple. There are a few nearby places that one can visit and some of them are Edakara, Chungathara, Kalamoola Valipolla and Pookutumpadam.
Popular among tourists visiting the town is the hanging bridge which is considered the longest in the state, along with the Nedumkayam forest reserve which also houses an elephant camp.

Must See Places in Nilambur, India

The world's first teak plantation was developed in the Conolly Plot in Nilambur almost 150 years ago (1842-1844). Christened after H.V. Conolly, the then Collector of Malabar, the plot occupies an area of 2.31 hectares of teak agricultural estate. With the help of Shri Chathu Menon, H.V. Conolly led the way for the establishment of the teak plantation in Nilambur.Nilambur Kingdom or Nilambur Kovilakam was a former feudal city-state in present day Kerala state, India,situated near to the Nilgiri range of the Western Ghats. It was ruled by Samantha Kshatriyas who were the vassals of the Zamorins of Calicut, with the capital located 25 kilometers north of Manjeri in present day Malappuram district. Famous Vettakkorumakan Kovil (famous for Pattutsavam) and Nilambur Kovilakam are situated on the banks of Chali river and Nilambur is known for its unique teak plantations and the Teak Museum. The Nilambur – Shoranur Railway Line was built by the British to carry woods and other products from these forests to the outside world.The area was an ancient tribal settlement, and in Nilambur forests the remains of ancient temples can be found. Cholanaikkans, one of the most primitive tribes in South India and one of the last remaining hunter-gatherer tribes, numbering only 360 in 1991, first contacted in the 1960s, are seen in the Karulai and Chunkathara forest ranges near Nilambur. During the Mysore invasion of Kerala the dynastic rule came to an end. 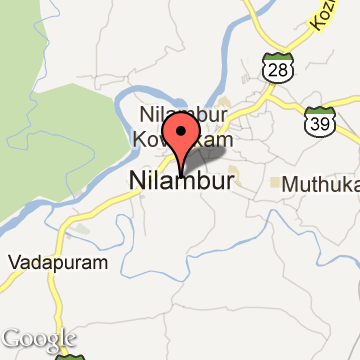