Neemrana is an ancient historical town in Alwar district of Rajasthan, India, situated at 122 km from Delhi on the Delhi-Jaipur highway in Behror tehsil. It is situated in between Behror and shahajahanpur. Neemrana comes under the Delhi NCR region and it is an industrial hub. This area is also known as Raath region, It is the site of 14th century hill-fort occupied by Chauhans till 1947. The erstwhile ruling family is considered to be the direct lineage of Prithviraj Chauhan. Some distance from Neemrana is another fort, Kesroli in Alwar district, that is one of the oldest heritage sites. Historians trace it to the Matsya Janapada of the Mahabharata times. In Kesroli one gets to see the oldest remains of Buddhist Vihara at Viratnagar where the Pandavas spent the last year of their exile incognito; Pandupole, with the only reclining statue of Hanuman; the samadhi of the ruler saint Bhartrihari and Talavriksha with ancient water reservoirs.

This fort covers 25 acres of land and the stepped palaces of this structural beauty cut into the hillside to sprawl over and rise to ten levels providing the most splendid views. The ruins of this Fort-Palace have been sensitively restored and reconstructed by the Neemrana Group of Hotels. The rooms are furnished with combining traditional Indian and colonial furniture, antiques and object art. Most rooms have private balconies or terraces. Even the bathrooms have been designed to have views of the magical countryside below.

Must See Places in Neemrana, India

Neemrana became the third capital of the descendants of Prithviraj Chauhan III, who was killed in battle by Mohammad Ghori in 1192 AD.Neemrana derived its name from a brave local chieftain Nimola Meo, who when defeated by the Chauhans, pleaded that his name be given to his lost kingdom. 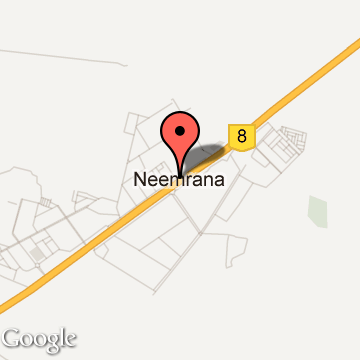