Chitaurgarh  (also Chittor, Chittaur, or Chitorgarh) is a city and a municipality in Rajasthan state of western India. It lies on the Berach River, a tributary of the Banas, and is the administrative headquarters of Chittorgharh District and a former capital of the Sisodia Dynasty of Mewar. The city of Chittaurgarh is located on the banks of river Gambhiri and Berach. The district was bifurcated and a new district namely Pratap Garh was created with certain portion taken from Udaipur district in the newly created district of Pratap Garh.

Must See Places in Chittorgarh, India

Chittorgarh Fort is considered to be the largest fort of India in terms of area. It is stated that the fort was constructed by the Mauryans during the 7th century AD and hence derives its name after the Mauryan ruler, Chitrangada Mori, as inscribed on coins of the period. Historical records show Chittorgarh fort as the capital of Mewar for 834 years.It was established in 734 AD by Bappa Rawal, founder ruler in the hierarchy of the Sisodia rulers of Mewar. It is also said that the fort was gifted to Bappa Rawal as part of Solanki princess’s dowry in the 8th century. The fort was looted and destroyed at the hands of Emperor Akbar in 1568 AD and subsequently never resettled but only refurbished in 1905 AD. Three important battles were fought for control of the fort; in 1303, Ala-ud-din Khilji besieged the fort; in 1535, Sultan of Gujarat Bahadur Shah besieged the fort; and in 1568, Mughal Emperor Akbar attacked the fort. Not that there were only defeats at the fort. Excluding the periods of siege, the fort had always remained in possession of the Sisodias of the Guhilot (or Gehlot/Guhila) clan of Rajputs, who descended from Bappa Rawal. There were also success stories of establishment of the fort and its reconstruction after every siege, before it was finally abandoned in 1568, all of which are narrated.

Chittor is cited in the Mahabharat epic. It is said that Bhima, the second of the Pandava brothers of Epic Mahabaharata fame, known for his mighty strength gave a powerful hit with his fist to the ground that resulted in water springing up to form a large reservoir. It is called Bhimlat kund, an artificial tank named after Bhima. Folk legend also mentions that Bhima started building the fort. 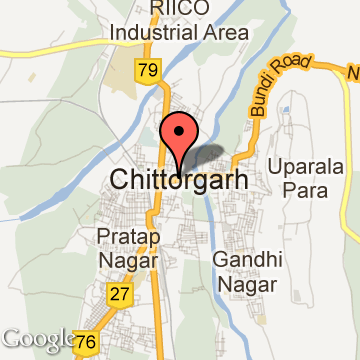