Pali is a town in Rajasthan state of western India. Located in the duthariya region, Pali is the administrative headquarters of Pali District. It is situated on the bank of the river Bandi and is 35 km south east of Jodhpur. It is known as "The Industrial City".

Pali is named after the Paliwal Brahmins who once inhabited the area. Ancient Pali housed a highly evolved civilization. The land, leased by the then chief of Mandore (the former capital of Jodhpur district), was cultivated diligently by the Paliwals who abandoned their former priestly profession. The temples of Somnath and Naulakha are very old. Naulakha Jain temple has elaborate carvings while Somnath Shiv temple is known for its exquisite sculptures.

Must See Places in Pali, India

In the 11th century AD, Pali was ruled by the Guhilas of Mewar. In the 12th century it became a part of the Nadol kingdom and was ruled by the Chauhan clan. In 1153 AD it was ruled by Chalukya Kumarpal and his feudatory Vahadadeva. Then it came under possession of Songara Chauhans of Jalore.

The Rathor dynsasty chronicles relate that Siyaji or Sheoji, grandson of Jai Chandra, the last Gahadvala Rathore king of Kannauj, came to Marwar on a pilgrimage to Dwarka in Gujarat, and on halting at the town of Pali he and his followers settled there to protect the Brahmin community from the raids of marauding bands. His devali with the inscription of 1273 AD was discovered 21 km north west of Pali. Champavatas Rathores ruled Pali until 1761 AD when it became part of Jodhpur state.

Rao Chanda, tenth in succession from Siyaji, finally wrested control of Marwar from the Pratiharas. His son and successor, Rao Jodha, moved the capital to the city of Jodhpur, which he founded in 1459. Pali remained a part of the Marwar kingdom until 1949, when the last ruling Maharaja acceded to newly-independent India. The oldest temple in Pali is the temple of Somanatha. Maharana Pratap was born in Pali. His birthplace is known as Juni Kacheri Near Dhanmandi. Maharan Pratap's Statue inograted on 4 June 2011 By District Collector Mr. Neeraj Kumar Pawan.

Geologists trace the existence of Pali to pre-historic age and maintain that it has emerged from the vast western sea spread over a large part of the present day Rajasthan. In the Vedic age Maharsi Javali stayed in this area for meditation and interpretation of Vedas. The Pandavas in the Mahabharata age also have made this area (near Bali) their resting place during the exile. As a part of ancient Arbuda Province, this area was known as Balla-Desh.

Historical relics depict the existence of this area during the Kushana Age, when King Kannishka had conquered Rohat and Jaitaran area, parts of today's Pali district, in 120 AD. Till the end of seventh century A. D., this area was reigned by the Chalukya King Harshavardhana who also conquered Bhinmal and most of the present area of Rajasthan.

After the Arab invasions of India this area was concentrated by Rajput rulers from all over India. During the period from 10th to 15th century, boundaries of Pali extended to adjoining Mewar, Godwad and Marwar. All Rajput rulers resisted the foreign invaders but individually fought for each other's land and leadership.

After the defeat of Prithvi Raj Chouhan, the great warrior against Mohd. Gauri, the Rajput power of the area was disintegrated and Mewar and Godwad area of Pali become the subjects of then ruler of Mewar, Maharana Kumbha. But Pali city which was ruled by Brahmin rulers with the patronage of neighbouring Rajput rulers, remained peaceful and progressive.

16th and 17th century saw a number of battles in the surrounding areas of Pali. Shershah suri was defeated by Rajput rulers in the battle of Gini, Mughal emperor Akbar's army had constant battles with Maharana Pratap in Godwad area. Again after the Mughals had conquered almost all of Rajputana, Veer Durga Das Rathore of Marwar made organized efforts to redeem the Marwar area from Aurangzeb, the last Mughal emperor. By then Pali had become subservient to Rathores of Marwar state. Pali was rehabilitated by Maharaja Vijay Singh and soon it became an important commercial center.

Role in struggle for freedom: Under British rule pali played an important role by pioneering the freedom struggle in Marwar. Various Thakurs of pali under the stewardship of Thakur of Auwa, who was the most powerful of all, confronted with the British rule. Auwa fort was surrounded by the British army and then conflicts lasted by 5 days, when at last the fort was possessed by the British army. But this heroie action of Auwa paved the way for continued and organised struggle for freedom. 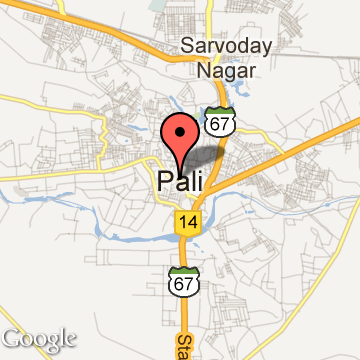