Located almost on the edge of the Thar Desert, the city of Jodhpur was founded in 1459 by Rao Jodha, the chief of the Rathore clan of Rajputs and was the capital of the State of Marwar.
Jodhpur is also known as the Sun City because the sun shines brightly here every day of the year, and as Blue City since most houses in the old part of the city are painted blue.
The forts and palaces, temples and havelis, culture and tradition, spices and fabrics, colour and texture, a booming handicrafts industry, all add up to make this historic city worth a visit.

Must See Places in Jodhpur, India

Jodhpur was also part of the Gurjara - Pratihara empire and until 1100 CE was ruled by a powerful Bargujar King. Jodhpur was founded in 1459 by Rao Jodha, a Rajput chief of the Rathore clan. Jodha succeeded in conquering the surrounding territory and thus founded a state which came to be known as Marwar. As Jodha hailed from the nearby town of Mandore, that town initially served as the capital of this state; however, Jodhpur soon took over that role, even during the lifetime of Jodha. The city was located on the strategic road linking Delhi to Gujarat. This enabled it to profit from a flourishing trade in opium, copper, silk, sandals, date palms and coffee.

Early in its history, the state became a fief under the Mughal Empire, owing fealty to them while enjoying some internal autonomy. During this period, the state furnished the Mughals with several notable generals such as Maharaja Jaswant Singh. Jodhpur and its people benefited from this exposure to the wider world: new styles of art and architecture made their appearance and opportunities opened up for local tradesmen to make their mark across northern India.

Aurangzeb briefly sequestrated the state (c.1679) on the pretext of a minority, but the rightful ruler Maharaja Ajit Singh was restored to the throne by Veer Durgadas Rathore after Aurangzeb died in 1707 and a great struggle of 30 years. The Mughal empire declined gradually after 1707, but the Jodhpur court was beset by intrigue; rather than benefiting from circumstances, Marwar descended into strife and invited the intervention of the Marathas, who soon supplanted the Mughals as overlords of the region. This did not make for stability or peace, however; 50 years of wars and treaties dissipated the wealth of the state, which sought and gratefully entered into subsidiary alliance with the British in 1818.

During the British Raj, the state of Jodhpur had the largest land area of any in Rajputana. Jodhpur prospered under the peace and stability that were a hallmark of this era.The land area of the state was 23,543 sq mi (60,980 km2) its population in 1901 was 44,73,759. It enjoyed an estimated revenue of £35,29,000/. Its merchants, the Marwaris, flourished without let or limit and came to occupy a position of dominance in trade across India. In 1947, when India became independent, the state merged into the union of India and Jodhpur became the second city of Rajasthan.

At the time of partition, ruler of Jodhpur Hanwant Singh did not want to join India, but finally due to the effective persuasion of Sardar Vallab Patel,the then Home Minister at the centre, the princely state of Jodhpur was included in Indian Republic. Later after State Reorganization Act, 1956 it was made part of the state of Rajasthan. 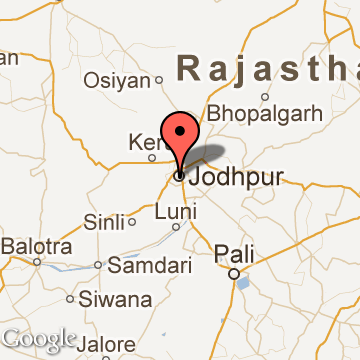