Along the eastern bank of the Chambal River lies Kota - an amazing example of majestic medieval age and modern industrialization. Kota is located on a high sloping tableland forming a part of the Malwa Plateau. The Mokandarra hills run from southeast to northwest of the town. Once the part of the erstwhile Rajput kingdom of Bundi, Kota became a separate princely state in the 17th century. Today, besides being Rajasthan's industrial centre, Kota also serves as army headquarters. Its wealth of impressive forts, opulent palaces and splendid temples of past centuries retain their former glory. Its present-day edifices and heavy industries have made it the industrial heartland of Rajasthan. Summers in Kota are quite hot. The city experiences scant rainfall between June and August. Winters are cool and are the best times to visit the city. Dussehra festival is celebrated all over the country but the Kota Dussehra is quite unique for it marks more than just the beginning of a festive period. Rich in courtly splendour and age old traditions, the Dussehra festival here is marked by a glittering procession, which attracts thousands from the surrounding villages.

Must See Places in Kota, India

The history of the city of Kota dates back to the 12th century A.D. when the Hada tribal chief, Rao Deva, occupied the region and founded Bundi and Hadoti. Later, in the early 17th century AD through the reign of the Mughal Emperor Jahangir, the ruler of Bundi Rao Ratan Singh presented the smaller principality of Kota to his son, Madho Singh. An old palace, dating back to the time when Kota was under the direct of Hada Chieftaincy Hadoti faces the Kota stream. The Durbar Hall is elaborate with beautiful mirror work and has ebony and ivory doors. Beautiful miniatures of the Kota school are housed within the Hall. Other distinguished edifices of the past era are the Brij Raj Bhawan Palace, Jag Mandir and island Palace, a splendid havelis with beautiful frescoes and the majestic cenotaphs.

Earlier it was a part of Bundi state, but later it grew to be a bigger state. What retains the past glory are the untouched wealth of impressive forts, opulent palaces and temples dating back over several centuries. These temples were conquered by the Hada chieftain Rao Deva.

It was at the time of the Mughal Emperor Jahangir that Rao Ratan Singh gifted this territory to his son Madho Singh. The Kota state reflects in the form of a beautiful collection of Stone Idols (murties) in the Raj Mahal, embellished with gold stained glass work on the walls, the silver mirror work on ceilings and the marvelous wall paintings. 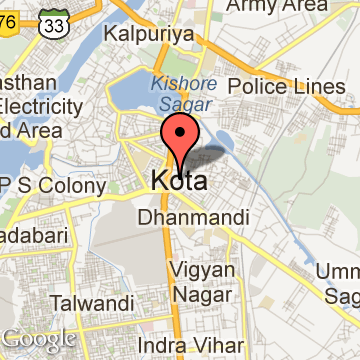