Jhalawar is a city in southeastern Rajasthan. It was the capital of the former princely state of Jhalawar, and is the administrative headquarters of Jhalawar District. Jhalawar was once known as Brijnagar.A visit to the Jhalawar is assured to be a memorable experience. Most commonly used languages in Jhalawar are Hindi, Rajasthani and English. Jhalawar is a treasure house of forts, wildlife and cave paintings. The major exports from the Jhalawar are cotton, oil-seeds and opium. Jhalawar has stony but water-laden lush landscape. Winters are colorful and mesmerizing with Red poppy fields and orange laden. Jhalawar region contributes a major share of the production of Citrus.

Must See Places in Jhalawar, India

The city of Jhalawar was founded by Jhala Zalim Singh, who was the then Dewan of Kota State (1791 A.D.). He established this township, then known as Chaoni Umedpura, as a cantonment. The township was at the time surrounded by dense forests and wildlife.Jhalawar was a capital city of erstwhile royal I state it belonged to the Kota region and was the trade centre of Royal Jhala state. Jhalawar has a fascinating history.

Jhalawar region was encircled with wild animals and wide forests. Zalim Singh identified the strategic advantage of this region and developed it in to a township. Jhalawar was used as the temporary military quarters to contain Maratha invaders.

British rulers separated Jhalawar in 1838 AD from Kota district. Jhala Prithvi Singh ruled Jhalawar region around 30 years after Zalim Singh. Later, it was handed over to Madan Singh (Grand son of Zalim Singh). Madan Singh was the first ruler of Jhalawar state. At the time of Madan Singh, construction of Ghar Palace was started. Majority development of Jhalawar as an ethnically rich city took place during 1899-1929 AD at the time of Rana Bhawani Singh.

Jhalawar region is famous for grandeur in forests with exotic flora and fauna. Jhalawar forests are home for many breeds of birds which can be seen on the roads while driving along the green fields. Jhalawar is situated in between Kali Sindh River and rocky terrain. Even Jhalawar has rocky landscape but it has water-laden green topography. Jhalawar is also famous for its contribution in Citrus production. 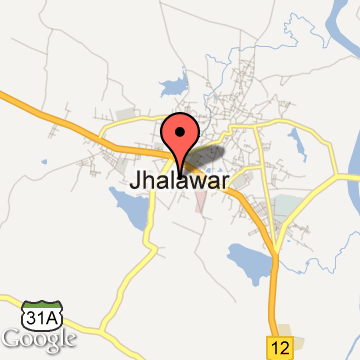