Hazaribag translates into “Land of A thousand gardens". Located 2019 ft above sea level, the place is a famous health resort. It has excellent climate and scenic beauties all around it in the midst of dense forest which is quite rich in flora and fauna. The Hazaribagh plateau has on its eastern margin, Parasnath - the highest hill in the Bihar, rising to a height of 4480 feet.

Must See Places in Hazaribagh, India

In ancient times the district was covered with inaccessible forests inhabitated by tribes who remained independent. The entire territory of Chhotanagpur, known as Jharkhand (meaning forest territory) was presumably beyond the pale of outside influence in ancient India. Throughout the Turko-Afghan period (up to 1526 CE), the area remained virtually free from external influence. It was only with the accession of Akbar to the throne of Delhi in 1556 that Muslim influence penetrated Jharkhand, then known to the Mughals as Kokrah. In 1585, Akbar sent a force under the command of Shahbaj Khan to reduce the Raja of Chotanagpur to the position of a tributary. After the death of Akbar in 1605, the area presumably regained its independence. This necessitated an expedition in 1616 by Ibrahim Khan Fateh Jang, the Governor of Bihar and brother of Queen Noorjehan. Ibrahim Khan defeated and captured Durjan Sal, the 46th Raja of Chotanagpur. He was imprisoned for 12 years but was later released and reinstated on the throne after he had shown his ability in distinguishing a real diamond from a fake one.

In 1632 CE, Chotanagpur was given as Jagir to the Governor at Patna for an annual payment of Rs.136,000. This was raised to Rs.161,000 in 1636 CE. During the reign of Muhammad Shah (1719–1748), Sarballand Khan, the Governor of then Bihar, marched against the Raja of Chotanagpur and obtained his submission. Another expedition was led by Fakhruddoula, the Governor of Bihar in 1731.

He came to terms with the Raja of Chotanagpur. In 1735 Alivardi Khan had some difficulty in enforcing the payment of the annual tribute of Rs. 12000 from the Raja of Ramgarh, as agreed to by the latter according to the terms settled with Fakhruddoula.

This situation continued until the occupation of the country by the British. During the Muslim period, the main estates in the district were Ramgarh, Kunda, Chai and Kharagdiha. Subsequent to the Kol uprising in 1831 that, however, did not seriously affect Hazaribag, the administrative structure of the territory was changed. The paraganas Ramgarh, Kharagdiha, Kendi and Kunda became parts of the outh-West Frontier Agency and were formed into a division named Hazaribag as the administrative headquarters.

In 1854 the designation of South-West Frontier Agency was changed to Chota Nagpur and it began to be administered as a Non-regulation province under the Lieutenant Governor of the then Bihar. In 1855-56 there was the great uprising of the Santhals against the British but was brutally suppressed.

During British rule, one had go by train to Giridih and then travel in a vehicle called push-push to Hazaribagh. It was pushed and pulled by human force over hilly tracts. It was exciting journey across rivers and through dense forests infested with bandits and wild animals. Rabindranath Tagore travelled in a push-push along the route in 1885. He has recorded the experience in an essay, Chotanagpur families. When the Grand Chord was opened in 1906, Hazaribagh Road station was linked with the town. For many years, Lal Motor Company operated the rail-cum-bus service between Hazaribagh town and Hazaribagh Road station. 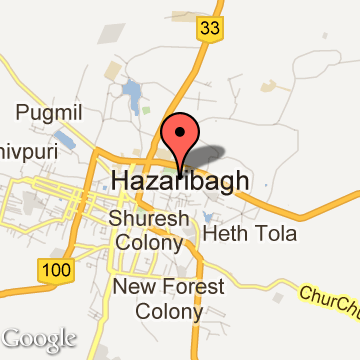