Chanderi is also famous for its brocades and muslins, especially for its handwoven Chanderi sarees. Here, master weavers use silk and cotton to create dazzling weaves, distinguished by beautiful borders. Usually in subtle hues, the Chanderi sarees have sophistication hard to match. In the silk Zari sarees, influences of the Varanasi style are visible. They generally have a rich gold border and two gold bands on the pallav. The more exclusive ones have gold checks with lotus roundels all over which are known as butis.

Must See Places in Chanderi, India

Chanderi is located strategically on the borders of Malwa and Bundelkhand. History of Chanderi goes back to the 11th century, when it was dominated by the trade routes of Central India and was proximate to the arterial route to the ancient ports of Gujarat as well as to Malwa, Mewar, Central India and the Deccan. Consequently, Chanderi became an important military outpost. The town also finds mention in Mahabharata. Shishupal was the king of Chanderi during the Mahabharata period.

Chanderi is mentioned by the Persian scholar Alberuni in 1030. Ghiyas ud din Balban captured the city in 1251 for Nasir ud din Mahmud, Sultan of Delhi. Sultan Mahmud I Khilji of Malwa captured the city in 1438 after a siege of several months. In 1520 Rana Sanga of Mewar captured the city, and gave it to Medini Rai, a rebellious minister of Sultan Mahmud II of Malwa. The Mughal Emperor Babur captured the city from Medini Rai and witnessed the macabre Rajput rite of jauhar, in which, faced with certain defeat and in an attempt to escape dishonor in the hands of the enemy, women with children in their arms jumped in a fire pit to commit suicide,which was made for this specific purpose,against the background of vedic hymns recited by the priests.Jauhar was performed during the night and in the morning the men would rub the ashes of their dead women folk on their forehead,don a saffron garment known as kesariya,chew tulsi leaves (in india tulsi leaves are placed in the mouth of a dead body),symbolizing their awareness about impending death and resolve to fight and die with honour.This method of fighting & dying for the cause of retaining honour was called "SAKA".

In 1540 it was captured by Sher Shah Suri, and added to the governorship of Shujaat Khan. The Mughal Emperor Akbar made the city a sarkar in the subah of Malwa. According to Ain-e-Akbari, the autobiography of Akbar, Chanderi had 14000 stone houses and boasted of 384 markets, 360 sapcious caravan sarais  and 12,000 mosques.

The Bundela Rajputs captured the city in 1586, and it was held by Ram Sab, a son of Raja Madhukar of Orchha. In 1680 Devi Singh Bundela was made governor of the city, and Chanderi remained in the hands of his family until it was annexed in 1811 by Jean Baptiste Filose for the Maratha ruler Daulat Rao Sindhia of Gwalior. The city was transferred to the British in 1844. The British lost control of the city during the Revolt of 1857, and the city was recaptured by Sir Hugh Rose on 14 March 1858. Richard Harte Keatinge led the assault, for which he was awarded the Victoria Cross. The city was transferred back to the Sindhias of Gwalior in 1861, and became part of Isagarh District of Gwalior state.

After India's independence in 1947, Gwalior became part of the new state of Madhya Bharat, which was merged into Madhya Pradesh on 1 November 1956. 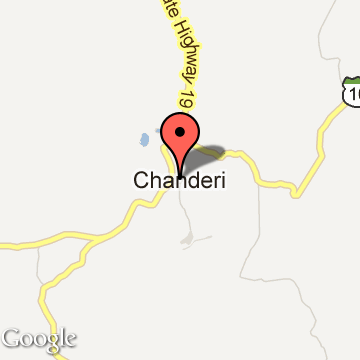