Bundi is a small town with rustic setting that stands on the foothills of the Aravali Mountains in the South East region of Rajasthan. It is very famous for its baolis meaning waterworks or step wells, havelis, temples and chhatris with carved pillars

There is a dreadful lore attached to Bundi. Suraj Mal, Bundi’s ruler, was paying a visit to Rana Ratna of Mewar who was married to his sister. It so happened that Rana Ratna had decided to kill Suraj Mal, and to further this design he invited the latter to a hunt. On their way to the forests they encountered a sati (here: widow about to burn herself on her husband’s funeral pyre) who cursed them saying that whenever a Rana and a Rao would meet at the annual Aheria (Bundi’s royal spring hunt), one of them would lose his life. On this occasion, however, both Suraj Mal and Rana Ratna died at each other hands (see History). Later, four such meetings occurred between the rulers of Bundi and Mewar and each time one or both were killed.

Must See Places in Bundi, India

Bundi has one of the most magnificent histories that a region can have, and many wars and battles were fought here for over 600 years between Rajput clans, the Marathas and the British. Eventually it was Bundi which became the loser, not in terms of military losses but those of statesmanship. In 1264 it was deprived of the region which became Kota when Shah Jahan bestowed the area on the 14 year old Madho Singh (see Kota History). Then again in 1838 Bundi was forced to part with its land in the east when Zalim Singh, with a little help from the British, hewed another state out of Bundi – that of Jhalawar (see Jhalawar History).

Bundi’s royal coat of arms is an exhibition of the origin of the Hara Chauhanas, with a warrior emerging from flames signifying the genesis of the clan from the Agni kunda (fire pit) atop Mount Abu. Bulls representing dharma (piety) flank the inevitable shield topped by a slanted katar (dagger).

While Kota emerged as the stronghold of the Hara Chauhanas during the 18th century, Bundi was gradually reduced to being just a titular state. It gradually lost its importance, thanks to Zalim Singh who ruled nearby Kota. Zalim Singh was the unofficial ruler of the regions of Kota, Bundi and Jhalawar, and the maharaja of Bundi Umed Singh was just an honorary figure. This was the same Umed Singh who, on his father’s death, had been placed on the throne when he was an infant and on whose behalf Zalim Singh had become Regent of Bundi, ultimately taking control (see Kota History).

It was from Kota that decisions were taken, be it of a military nature or that of administration. By the time the British came in and established themselves in eastern and southern Ragesthan, Bundi had become a weak and powerless ramification of Kota. However, unlike Kota and Jhalawar, Bundi sustained its independence from British rule, before as well as after the Uprising of 1857. 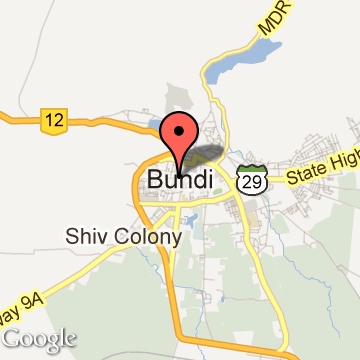