Gopalganj is a town, municipality and headquarters of Gopalganj district in the Indian state of Bihar. It was carved out of old Saran district (consisting of Chhapra, Siwan and Gopalganj) on October 2, 1973.

Must See Places in Gopalganj, India

An ancient state of "Mallyas" known for their bravery and love for civil liberty serves as the frontier of Gopalganj. In Pre- historic time, Gopalganj was part of Nepal, up to the bank of the Saryu river which bounds Siwan district on South of it. Siwan means the boundary - the Southern boundary of Nepal Kingdom(earlier) . Gopalganj, which till 1875 was only a tiny hamlet, was made a subdivision of the old Saran district in the same year. It became an independent district on October 2, 1973. The old Saran district included the present districts of Saran, Siwan and Gopalganj.

The history of Gopalganj is a part of the history of old Saran District. The composite Saran district lies on one of the main lines of the Aryan advance.

According to a tradition preserved in Vedic literature, the Videhas marched eastwards from the Saraswati until they reached the banks of the Gandak and were informed by Agni, the God of fire, that their home lay to the east of its broad stream. In obedience to his directions, the Videhas crossed the river and founded a powerful kingdom on its eastern bank ; but it seems likely that some of them settled in Saran, which lay on the line of march, while the majority of them crossed the Gandak. 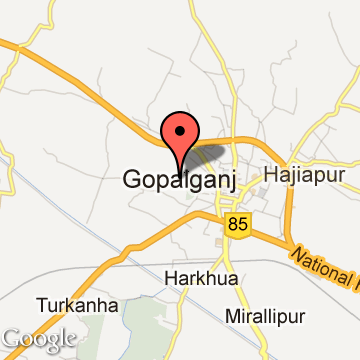