Dhulian is a city and a municipality in Murshidabad district in the state of West Bengal, India. It is located between the Ganges and the Hooghly canal.

Dhulian has been mentioned as an inland water transport (IWT) trading point between Murshidabad and the city of Rajshahi in Bangladesh. Low-cost barges could potentially ply the Ganges river, called Padma in downstream Bangladesh, exchanging goods and reducing smuggling. This proposal has not been agreed to yet by the two countries.

Dhulian, West Bengal: Dhulian is a city and a municipality in Murshidabad District - 9th most populous district in India, in the State of West Bengal. Located at 24°41′N 87°58′E with an average elevation of 13 feet above sea level, Dhulian lies between the Himalayan trans-boundary river - Ganges River and the Hooghly Canal - also known as 'Bhagirathi-Hooghly'- a distributary of River Ganges.

Dhulian is 94 kms northwest of Baharampur - also called Berhampore (Murshidabad District Head Quarter; 86 kms northwest of Murshidabad (the former Capital of undivided Bengal); 278 kms north of the current State Capital - Kolkata; 54 kms southwest of Malda and 315 kms southwest of Siliguri. Dhulian is an Urban Agglomeration which means that according to Government Census, Dhulian has a population of more than 1 lakh people.

Being surrounded by 2 large perennial rivers, the entire Murshidabad District is an extremely fertile land with Dhulian serving as an inland water transport trading point between Murshidabad in Murshidabad District in WB and Rajshahi in Bangladesh. Farakka Barrage - 7350-foot long Barrage is set across the River Ganges in West Bengal and is just 19 kms north of Dhulian.

Dhulian is a quiet town on the banks of River Ganga and enjoys riverside lifestyle where the locals spend a good amount of time by the river daily. It's a no-fuss river town where one does not have to be pressurized by the regular tourist hassle. You can still enjoy the river activities like boating and fishing and long river-walks here.

When in Dhulian, you could visit some places nearby which are not in Dhulian but a little above 20 kms which are very interesting sites. Farakka Barrage over River Ganges; Nimtita Zamindari Palace, and the Snake Garden are noteworthy.

Eid-ul-Fitr and Bakri-Eid being major festivals of the Murshidabad District (owing to Muslims constituting 63% of the District population) Durga Puja, Kali Puja and Makar Sankranti (harvest festival) are also celebrated in Dhulian.

Must See Places in Dhulian, India 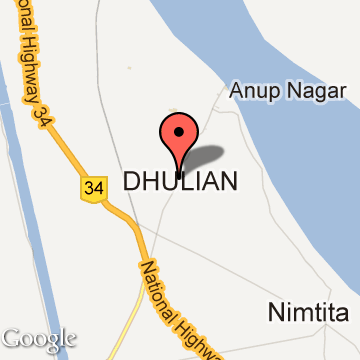