Cooch Behar district  is a district of the state of West Bengal, India, as well as the district's namesake town. During the British Raj, the town of Cooch Behar was the seat of a princely state of Koch Bihar, ruled by the Koch dynasty. As of 2011 it is the third least populous district of West Bengal (out of 19), after Dakshin Dinajpur and Darjeeling.

The name "Cooch-Behar" is derived from the name of the Koch Rajbongshi tribe that is indigenous to this area. The word "Behar" is the Sanskrit word "Bihar" (to travel) which means the land through which the "Koch Rajbongshi" Kings used to travel or roam about ("Bihar").

The greatest Koch Rajbongshi King that has ever ruled in the Kingdom of Kamatapur is Maharaj Naranarayan, as well as his younger brother Prince Chilaray and other descendents. Historic Kamatapur comprises the total North Bengal maximum parts of Assam, some parts of present Bangladesh, Kishanganj district of Bihar and a few parts of Bhutan. The Koch-Rajbongshi community is demanding a separate state of their own comprising the parts of their old Kingdom to save their centuries-old culture from extinction.

How To Reach Cooch BeharOnce a princely state, Cooch Behar is the district headquarters and the largest town of Cooch Behar District, in the Indian state of West Bengal. It is the only planned city in the North Bengal region and boasts of a royal and imperial heritage. The town houses some of the most prolific and magnificent buildings and royal palaces. Talking about commutation, Cooch Behar is well connected by all the modes of transport, be it air, rail or road, which makes reaching the place a convenient task. To get detailed information on how to reach Cooch Behar, read through the following lines.

Must See Places in Cooch-Behar, India 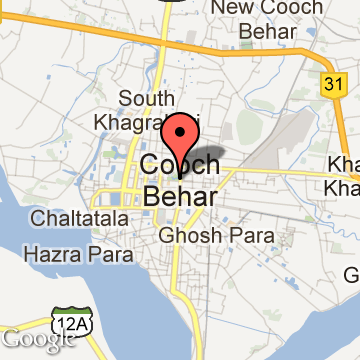