The Midnapore East District of West Bengal boasts of numerous lovely sea resorts, such as Digha, Mandarmani, Tajpur and Shankarpur which inspire the lovers of sea, sand and sun to visit them round the year and from far off places to spend their family vacations, and have a great time in the serene and tranquil surroundings of these tourist places.

Midnapore, also known as Medinipur, is a town located in the Paschim (west) Medinipur district of the West Bengal. The town is the headquarters of the district of Paschim Medinipur, which became an independent district after it was separated from the erstwhile Midnapore district in the year 2002. There are quite a few legends surrounding the name of the town. Many believe that Midnapur was named after the local deity Medinimata who is a reincarnation of the Goddess Shakti. Others believe that at one point in history there were so many mosques in the town that it could well have been compared to the Islamic holy city of Medina. Midnapore has a lot of religious importance as it is the site of many temples. The Jagannath Temple is the most famous and is visited by pilgrims from all around who come here to offer their prayers. The Rukmini Temple which was built in the 17th century, the Hanuman Temple, the Sitala Temple and the Habibpur Kali Ma Temple are some of the other temples that are in this town, making it a place of religious significance for Hindus. However, there are also quite a few mosques and dargahs in the town, including the popular Jora Masjid and Dewan Baba's majar among others. Midnapore played a major role during the Indian independence movement and was the home of many freedom fighters who laid down their lives for the county’s freedom. In fact, there are many monuments here which were built in honour of the local freedom heroes. The economy of the Medinipur district mainly strives on agriculture, but the town of Midnapore has gone through modernisation and is fast becoming a bustling cosmopolitan. It is one of the main centres of trade and commerce in the district with improving infrastructure. The town of Midnapore is very well connected both by road and by railway. Located close to the neighbouring states of Orissa in the south and Jharkhand in the west, the culture of the town is greatly influenced by these regions. Midnapore experiences a hot tropical climate. Summers here are hot and humid with temperatures soaring, especially during the day. The summer is also characterised by dust storms which are locally referred to as kalboishakhis. The monsoons bring in heavy rainfall while winter is mild and comfortable. The winter season with its pleasant weather is the best time to visit Midnapore.

Midnapore is the district headquarters of Paschim Medinipur district of the Indian state of West Bengal and is situated on the banks of the Kangsabati River. The region had a significant role in India's freedom struggle. Vegetation incluces eucalyptus and sal forests on the northwest side of town and form part of the Dalma Hills. There are numerous majars and dargahs dotting the city. Midnaporeans in general are laid-back and friendly. A number of festivals are held in Midnapore each year. Festivals include Urs of the venerated saint Hazrat Maulana Syed Shah Murshed Ali Alquadri Al Jilani son of Hazrat Syed Shah Mehr Ali Alquadri Al Baghdadi. Milad-un-Nabi is also celebrated with the bursting of fireworks, Durga or Dusshera Puja, Eid ul-Adha, Saraswati Puja, Kali Puja, Baraam Puja, Vishwakarma Puja, Sitala, Jagaddhatri, Holi, Janmashtami, Manasa, Kartika, Ganesh, etc are celebrated with much fan fare. Other places of Interest are Digha, Mondarmani, Tajpur, Shankarpur, etc.

Must See Places in Midnapore, India 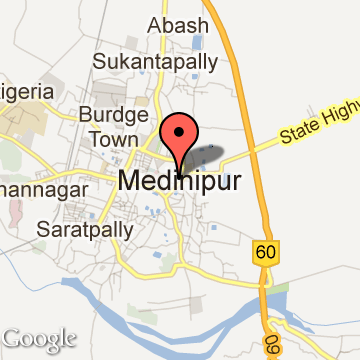