Dausa District is a district of Rajasthan state in western India. The city of Dausa is the district headquarters. Dausa District has a population of 1,316,790 (2001 census), an area of 2950 km², and a population density of 384 persons per km² with 62.75% literacy rate. It is bounded on the north by Alwar District, on the northeast by Bharatpur District, on the southeast by Karauli District, on the south by Sawai Madhopur District, and on the west by Jaipur District. The district is divided into five tehsils, Baswa, Dausa, Lalsot, Mahwa and Sikrai. The Sawa and Ban Ganga rivers run through the district. It is situated on National Highway no.11 From Jaipur to Agra. It is 55 km to the east of Jaipur. In Tehsil Mahwa there is a Gram Panchayat, Kherla Bujurg, it is famous for a record which was made during an election of member for legislative assembly Mahwa seat for Rajasthan Vidhan Sabha. All three candidates from National parties were resident this village, all of these three were from same cast (Gurjar), all were advocate by there profession. Eventually Hari Singh Gurjar was elected. BBC news services broadcasted a special programme about it.

Dausa is also known as Dev Nagari. Most commonly used languages in Dausa are Rajasthani, Hindi and English. Basanth panchami Mela is the popular fair in Dausa organized during February every year. Basanth panchami fair is celebrated for 3 days with a large local market for villagers to procure important requirements for the entire year. This festival is important to rural people of Dausa district. The district of Dausa was constituted on 10th April 1991 by separating four Tehsils namely Baswa, Lalsot, Sikrai, and Dausa.

Must See Places in Dausa, India

Kachwahas were built so many Haveli’s (palaces) and an old fort in and around Dausa. During 1871-72 AD Mr. Carlyle found a number of stone circles on the sloping ground to the north side of the foot of the hill at Dausa. An archeologist namely Dayaram Sanhi also visited Dausa and discovered other important and interesting antiquities, these are belong to medieval period.In Dhundhar region, Dausa was an important political region. Dausa region was ruled by Chauhan Raja soodh Dev during 996 to 1006 AD. Later, Raja Dule Rai (Son of Chauhan Raja soodh Dev) ruled this region for 30 years from 1006 to 1036.

Dausa is famous for Mehandipur Balaji (Lord Hanuman temple). Numerous devotees come to visit this temple throughout the year from all over India. 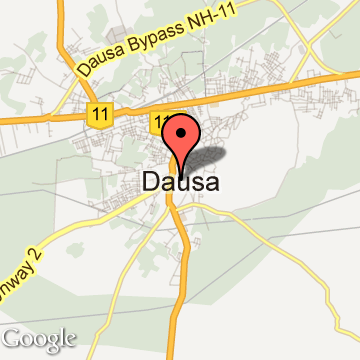