Nalanda is a city that is popular among tourists for the ruins of world’s oldest University that was founded in 5th century AD. Today travelers visit Nalanda to relive the experience of this ancient city of learning, with the grandeur still visible in the remnants. The city is located around 90 km from Patna and 60 km from Buddhist pilgrimage site of Bodh Gaya. The remnants of this ancient university takes travelers through the rich history, tradition, and culture of great nation.

This was the first residential University of the world with around 2,000 teachers and 10,000 students. The historical grandeur of Nalanda university has been described in details along with the excellence of education system by Chinese traveler Hieun Tsang. Hieun Tsang travelled here in 7th century AD and lived here for some time. Lord Buddha and Lord Mahavira also visited the University multiple times during his lifetime. The University also had numerous monasteries and viharas built by kings including Ashoka and Harshvardhana.

The main places to visit are the archaeological excavations of the university complex that is spread in an area of 14 hectares. The ruins also include the ramparts of ancient stupas and monasteries in the complex. Tourists should also visit the Nalanda Archaeological museum that holds beautiful collection of artefacts found during the excavations. The location of Nalanda makes it perfect to be combined with the travel plans to visit the other tourist destinations in Bihar including Rajgir and Bodh Gaya.  The nearest railway station to Nalanda is Rajgir and the nearest airport is Patna. The best time to visit Nalanda is from October to March, when the weather is pleasant.

Nalanda a part of the Bihar tourism circuit is situated at a distance of 90 km south east of Patna by road. Tour to Nalanda involves visit to ruins of magnificent university.Founded in the 5th century BC Nalanda was one of the world’s great universities and an important Buddhist centre until it was attacked by marauding Afghans in the 12th century. When Chinese scholar and traveler Xuan Zang visited between AD 685 and 762 10,000 monks and students resided here. One of the world's first residential universities Nalanda had dormitories for students. It accommodated over 10,000 students and 2,000 teachers.

An "architectural masterpiece," the university was marked by a lofty wall and one gate. It had eight separate compounds and ten temples with many meditation halls and classrooms. There were lakes and parks. The library was a nine storied building where students produced meticulous manuscripts. All the fields of learning were covered and it attracted pupils and scholars from Korea, Japan, China, Tibet, Indonesia, Persia and Turkey.The university received royal patronage of the great emperior Harshavardhana of Kannaui and also Pala kings.Huien Tsang received here the Indian name Mokshdeva.Nalanda acquired a celebrity status all over the east as a centre of Buddhist theology and educational activities.Its importance as a monastic university continued until the end of the 12th century.

Architecturally it was masterpiece with eight separate compounds, 10 temples, meditation halls, classrooms, lakes and parks. It was sacked by Muslim invaders led by Bakhtiyar Khalji in 1193. When the Tibetan translator Chag Lotsawa visited the university in 1235, he found it damaged and looted, but still functioning with a small number of monks.

The etymology of the word Nalanda is uncertain. Different derivations have been proposed.Hieun Tsang the Chinese traveler who visited and studied at Nalanda in 7th century says that “to the south of Nalanda,in the middle of an amra(mango) grove there was a tank where dwelt a Naga (dragon) called Nalanda.”However this was a legendary account.

The second account which Huien-Tsang puts forth is that Tathagat in old days practiced the life of Boddhisattva here and become the king and established his capital in the land. Moved by pity for living things he delighted in continually relieving them. In remembrance of this virtue he was styled ‘Charity without intermission (Na-alam-da;Nalanda).

Must See Places in Nalanda, India

Nalanda was an acclaimed Buddhist center many of whirs buildings were erected by the Mauryan king Ashoka. A few of the monasteries were patronized at the time of Gupta dynasty. The university reached its zenith during the rule of Kumargupta, a Gupta ruler. The place was so highly valued that rulers like Harsha gave their whole hearted support to it.  Scholars from Greece, China, Japan, Korea and Persia visited it regularly. In the late 12th century, the university was rummaged by Turkish plunderers. Buddha visited it number of times and used to take shelter in its famous mango grove called Pavarika.

Nalanda has a very ancient history. Lord Vardhamana Mahavir and Lord Buddha frequently visited it in the 6th century BC.During his sojourns, the Lord Buddha found this place prosperous, teeming with population and containing mango groves. It is also supposed to be the birth place of Sariputra, one of the chief disciples of Lord Buddha. The University of Naanda was founded in the 5th century by the Gupta emperors. There were thousands of students and teachers. The courses of study included scriptures of Buddhism, Vedas, Hetu Vidhya, Shabda Vidhya; Chikitsa vidya Etc.The University received royal patronage of the great emperor Harshavardhana of Kannauj and also Pala Kings. It became a great centre of learning and students from countries were also attracted to this university.Hiuen Tsang received here the Indian name Mokshdeva.Nalanda acquired a celebrity spread all over the east as a centre of Buddhist theology and educational activities. Its importance as a monastic university continued until the end of the 12th century. 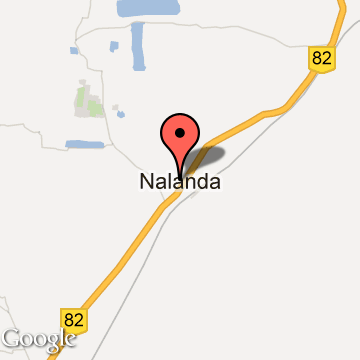