Darbhanga is one of the important districts of North Bihar situated in the very heart of Mithilanchal - the fertile, alluvial plains of North India. Under the British rule, Darbhanga was a part of Sarkar Tirhut upto 1875, when it was constituted into a separate district.  The name of the district has been derived from its head quarter and principal town, which is said to have been founded by Darbhangi Khan.

Must See Places in Darbhanga, India

The history of Darbhanga dates back to the Ramayana and Mahabharata periods; it is among the oldest cities of Bihar. According to the Vedic sources, the Videhas first migrated to the area from the banks of Saraswati in Punjab, they were guided to the east of Sadanira (Gandak River) by Agni, the God of Fire. Settlements were established and, thus, flourished the kingdom of the Videhas, the Selfless.In the course of time Videhas came to be ruled by a line of kings called Janaks. In this line of kings there was a very famous king named Mithi. To commemorate his greatness the territory was named as Mithila. Another famous king was Janak Sirdhwaja, father of Sita. The legends speak of various learned men patronized by Janak Sirdhwaja, who himself was an erudite scholar. Prominent among them were Yagyavalkya, who codified the Hindu law in his Yagyavalkya Smriti and Gautam, who had various valuable philosophical treatises to his credit. King Janak was himself a great philosopher and his ideas have been eternally enshrined in the Upanishads, especially in the Brihad-āraṇyaka Upaniṣada.The name Darbhanga is the mutated form of "Dwarbanga". That is, it is the combination of words "Dwar"(Gate) and "Banga" (Bengal) meaning "Gateway of Bengal". If one notices Bengali and Maithili, he will find many a phonetic similarities particularly in the main verbs of both the languages which ends with word sounding "Chhe".Some scholars say that Darbhanga was named after Dar (Dwar) and Bhangaa which means broken gates. It is assumed that the gates of the Qila (at Qilaghat probably) were broken (by cannons or elephants) in 1326 AD when Tughlak forces attacked the last independent North Indian Hindu king.Hindus began to flock to this town since the beginning of 19th century when the Maharaja of Darbhanga shifted his residence to this town and was granted the title Maharaja by East India Company. It was the biggest town of North Bihar for centuries, but after Muzaffarpur was connected to broad gauge railway in mid-1970s, the latter overtook Darbhanga due to shift of trade, commerce, business and transport to some extent. Once part of the Brahman kingdom of Mithila, Darbhanga passed to the Tughlaks in the 14th century. The British assumed control in 1765.Darbhanga was an ancient city of Mithila, which is an ancient cultural region of North India lying between the lower ranges of the Himalayas and the Ganges River. The Nepal border cuts across the top fringe of this region. The Gandak and Kosi River are rough western and eastern boundaries of Mithila.It was seat of the Maharaja of Darbhanga. During Akbar's reign in the sixteenth century, a second Maithil Brahmin family came to rule as the Khandavala Dynasty. During this period, Akbar also planted 100,000 mango trees in Darbhanga, at a place now known as Lakhi Bagh In British times, their estate, Darbhanga Raj, was the largest and richest of the great zamindari estates. Their capital was in Bhaur village in Madhubani, later shifted to the town of Darbhanga. They controlled most of Mithila until after Independence when the Republic of India abolished zamindari (Maharaja of Darbhanga was actually a zamindar entitled to add the title Maharaja in his name, besides the British title : KCIE (Knight Commander of Most Eminent Order of the Indian Empire). 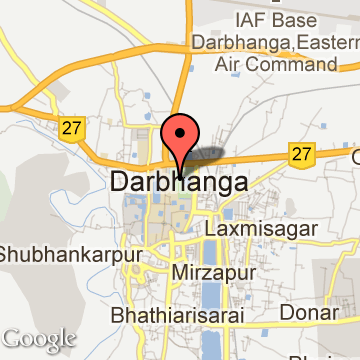