One of the major cities and trading centres of Bihar, Muzaffarpur is located on Burhi Gandak River and named after Muzaffar Khan who founded it in the 18th century. The area which constitutes the present day Muzaffarpur once formed part of Lichhavi kingdom, one of the oldest republics of the world.Vaishali, the seat of power of the Lichhavi, shares its border with that of Muzaffarpur. Needless to say, there are plenty of interesting historical sites around this area. The city’s other claim to fame is its best quality Litchi, which are exported all over the world. Muzaffarpur is also one of the gateways to Nepal.

Must See Places in Muzaffarpur, India

Muzaffarpur town was established by and named after an Afghan Md.Muzaffar Khan, an Amil (Revenue Officer) . The district is bounded by the East Champaran,Sitamarhi,Vaishali,Saran, Darbhanga and Samastipur districts . It has won international encomiums for its delicious Shahi(Royal) and China Lychee species.While the history of this town is not available fully but that of the recorded history of the district dates back to the rise of the Vrijjan Republic, when the center of political power shifted from Mithila to Vaishali. The Vrijjan Republic was a confederation of eight clans of which the Licchavis were the most powerful and influential. Even the powerful kingdom of Magadh had to conclude matrimonial alliances in 519 B.C. with the neighboring estates of the Licchavis. Ajatshatru invaded Vaishali and extended his sway over Tirhut. It was at this time that Patliputra (the modern Patna) was founded at the village Patali on the banks of the sacred Ganges river, and Ajatshatru built an invincible fortress to keep vigil over the Licchavis on the other side of the river. Ambarati, 40 km from Muzaffarpur is believed to be the village home of Amrapali, the famous Royal court dancer of Vaishali.From the visit of the Hieuen Tsang until the rise of the Pala dynasty, Muzaffarpur was under the control of Maharaja Harsha Vardhan, a powerful sovereign of North India. After 647 A.D. the district passed to the local chiefs. In the 8th century A.D. the Pala kings gained control over Tirhut and kept it until 1019 A.D. Chedi kings of Central India also exercised their influence over Tirhut until they were replaced by the rulers of the Sena dynasty towards the close of the 11th century.Sometime between 1211 and 1226, Ghais-u-ddin Iwaz, the ruler of Bengal, became the first Muslim invader of Tirhut. However, he could not succeed in conquering the kingdom, merely extorting tributes. It was in 1323 that Ghiyasuddin Tughlaq established his control over the district.The history of Muzaffarpur would be incomplete without a reference to the Simraon dynasty (in the north-east part of Champaran) and its founder, Nanyupa Deva, who extended his power over the whole of Mithila and Nepal. During the regime of Harasimha Deva, the last king of the dynasty, Tughlaq Shah invaded Tirhut in 1323 and gained control over the territory. Tughlaq Shah handed over the management of Tirhut to Kameshwar Thakur. Thus, the sovereign power of Tirhut passed from the Hindu chiefs to the Muslims.Towards the close of the 14th century the whole of North Bihar, including Tirhut, passed to the kings of Jaunpur and remained under their control for nearly a century, until Sikandar Lodi of Delhi defeated the king of Jaunpur. Meanwhile, Hussain Shah, the Nawab of Bengal, had become so powerful that he exercised his control over large tracts including Tirhut. The emperor of Delhi advanced against Hussain Shah in 1499 and got control over Tirhut after defeating its Raja. The power of the Nawabs of Bengal began to wane and, with the decline and fall of Mahood Shah, north Bihar formed a part of the mighty Mughal Empire. Though Muzaffarpur with the entire north Bihar had been annexed, the petty chieftains continued to exercise effective control over this area until the days of Daud Khan, the Nawab of Bengal. Daud Khan had his stronghold at Patna and Hajipur, and after his fall, a separate Subah of Bihar was constituted under the Mughal dynasty, with Tirhut forming a part of it.The victory of East India Company in 1764 at the battle of Buxar gave them control over the whole of Bihar and they succeeded in subduing the entire district. The success of the insurgency in Delhi in 1857 caused grave concern to the English inhabitants in this district and revolutionary fervor began to permeate the entire district. Muzaffarpur played its role and was the site of the famous bombing case of 1908. The young Bengali revolutionary, Khudiram Bose, a boy of barely 18 years, was hanged for throwing the bomb at the carriage of Pringle Kennedy, who was mistaken for Kingsford, the District Judge of Muzaffarpur. After independence, a memorial to this young evolutionary patriot was constructed at Muzaffarpur, which still stands. The political awakening in the country after the First World War stimulated nationalist movement in Muzaffarpur district as well. The visit of Mahatma Gandhi to Muzaffarpur district in December 1920 and again in January 1927 had tremendous political effect in arousing the latent feelings of the people and the district continued to play a prominent role in the country's struggle for freedom.Muzaffarpur played a very significant role in the history of North-Eastern India. The peculiarity of Muzaffarpur in Indian civilization arises out of its position on the frontier line between two most vibrant spiritual influences. To this day, it is a meeting place of Hindu and Islamic culture and thoughts. All sorts of modified institutions, representing mutual assimilation, rise along this border line. It has undoubtedly been this highly diversified element within her boundaries that has so often made Muzaffarpur the birthplace of geniuses.In January 1934, a colossal 8.1 magnitude earthquake struck the area, completely demolishing part of the city. The region was shaken strongly again in the 1988 Bihar earthquake. 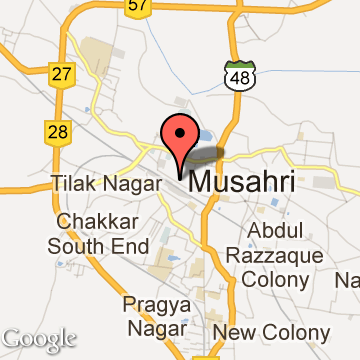