Haridwar, situated on the right bank of the holy Ganga, is regarded among the seven sacred cities of India. Legend has it that this was one of the four sites across India where a drop of Amrit, carried by Garuda, the celestial fell.
It is therefore one of the four venues where the Kumbh Mela – said to the largest congregation of humanity anywhere in the world – is held once every 12 years. Haridwar is also the place where the river Ganga enters the Indo-Gangetic plains for the first time. Haridwar is also home to several ashrams which specialize in teaching meditation and yoga.

Must See Places in Haridwar, India

A paradise for nature lovers, Haridwar presents a kaleidoscope of Indian culture and civilization. In the scriptures it has been variously mentioned as Kapilsthan, Gangadwar and Mayapuri. It is also an entry point to the Char Dham (the four main centers of pilgrimage in Uttarakhand viz, Badrinath, Kedarnath, Gangotri, and Yamunotri), hence, Shaivaites (followers of Lord Shiva) and Vaishnavites (followers of Lord Vishnu) call this place Hardwar and Haridwar respectively, corresponding to Har being Shiv and Hari being Vishnu.

In the Vanaparva of the Mahabharat, where sage Dhaumya tells Yudhisthira about the tirthas of India, Gangadwar, i.e., Haridwar and Kankhal, have been referred to, the text also mentions that Agastya Rishi did penance here, with the help of his wife, Lopamudra (the princess of Vidharba).

Sage Kapila is said to have an ashram here giving it, its ancient name, Kapila or Kapilastan.

The legendary King, Bhagirath, the great-grandson of the Suryavanshi King Sagar (an ancestor of Rama), is said to have brought the river Ganges down from heaven, through years of penance in Satya Yuga, for the salvation of 60,000 of his ancestors from the curse of the saint Kapila, a tradition continued by thousands of devout Hindus, who brings the ashes of their departed family members, in hope of their salvation. Lord Vishnu is said to have left his footprint on the stone that is set in the upper wall of Har-Ki-Pauri, where the Holy Ganges touches it at all times. 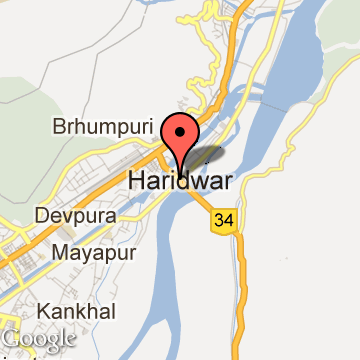