Passage of people into Haldwani can be traced back to the 15th -16th centuries when hill dwellers would make their way down into Haldwani to escape the bitter winters in the hills. These people were essentially animal rearers and they used to migrate along with their animals and were known as 'Gothiyas'. In Haldwani they used to engage themselves in small jobs and make 'khoya' from the milk which they got from their animals. During the British occupation they busied themselves in work related to forestry in Haldwani.

Must See Places in Haldwani, India

Few historians mention that in 14th century, a local ruler, Gyan Chand of Chand Dynasty, visited Delhi Sultanate and received the regions of Bhabhar- Terai up to the Ganga as a grant from then Sultan. Later, the Mughals tried to take over the hills, but their attempts received set back due to the difficult terrain.

In 1856, Sir Henry Ramsay took over as the Commissioner of Kumaon. During the Indian Rebellion of 1857, it was briefly seized by the rebels of Rohilkhand, soon martial law was declared in the region by Sir Henry Ramsay, and by 1858, the region was cleared of the rebels.

Later, Ramsay connected Nainital with Kathgodam by road in 1882. In 1883-84, the railway track was laid between Bareilly and Kathgodam. The first train arrived at Haldwani from Lucknow on April 24, 1884. Later, the railway line was extended to Kathgodam.

Gora Padao, 4 km south of Haldwani was named after a British camp/post at that location in the mid 1800s, Gora being a slang for the British. 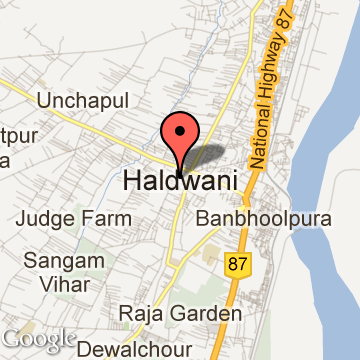