Mussoorie, known as the Queen of the Hills, famous for its scenic beauty, is a fascinating hill resort. It commands a wonderful view of the extensive Himalayan snow ranges in the north-west and glittering views of the Doon Valley, Roorkee, Saharanpur and Haridwar in the South. Mussoorie was discovered by Captain Young, an adventurous military officer in 1827, who was lured by the extraordinarily beautiful ridge and laid its foundation. The town retains much of its colonial charm and is well worth a visit for its beautiful scenery and lovely walks.

Must See Places in Mussoorie, India

In 1832, Mussourie was the intended terminus of the Great Survey of India that began at the southern tip of India. Although unsuccessful, the Surveyor General of India wanted to have the new office of the Survey of India based in Mussoorie. A compromise was to have it in Dehradun, where it still located.

By 1901 Mussoorie's population had grown to 6,461, rising to 15,000 in the summer season. Earlier, Mussoorie was approachable by road from Saharanpur, 58 miles (93 km) away. Accessibility became easier in 1900 with the railway coming to Dehradun, thus shortening the road trip to 21 miles (34 km).

The name Mussoorie is often attributed to a derivation of 'mansoor', a shrub which is indigenous to the area. The town is in fact often referred to as 'Mansoori' by most Indians.

The main promenade in Mussoorie is called, as in other hill stations, the Mall. In Mussoorie, the Mall stretches from Picture Palace at its eastern end to the Public Library (shortened to 'Library') at its western end. During the British Raj, signs on the Mall expressly stated: "Indians and Dogs Not Allowed"; racist signs of this type were commonplace in hill stations, which were founded 'by and for' the British. Motilal Nehru, the father of Jawaharlal Nehru, deliberately broke this rule every day whenever he was in Mussoorie, and would pay the fine. The Nehru family, including Nehru's daughter Indira (later Indira Gandhi) were frequent visitors to Mussoorie in the 1920s, 1930s and 1940s, and stayed at the Savoy Hotel. They also spent much time in nearby Dehradun, where Nehru's sister Vijayalakshmi Pandit ultimately settled full-time.

Now, Mussoorie suffers from overdevelopment of hotels and tourist lodges, given its relative proximity to Delhi, Ambala and Chandigarh, and has serious problems of garbage collection, water scarcity and parking shortages, especially during the summer tourist season. Landour, Jharipani and Barlowganj have fewer such problems. 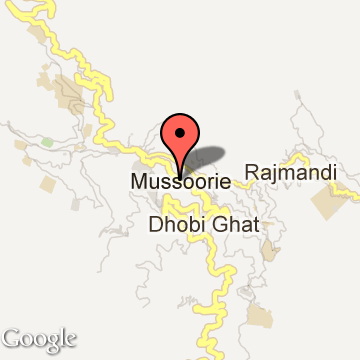