Located 280 km west of Sydney, Orange and its fertile surrounds produce delicious local produce including beef, lamb, fruits and wine – much of it available from regular farmers markets. The city is also rich in local history, has a flourishing cultural scene, beautiful parks and gardens, and is surrounded by natural attractions.

Follow the City Heritage Trail, a self-guided walk which takes in more than 40 places of historical interest. Enjoy walking along one of Mount Canobolas' well-marked tracks or spend some time exploring the Sensory Garden and the Biblical Garden at Orange Botanical Gardens.

Must See Places in Orange, Australia

In 1822 Captain Percy Simpson drove into the Wellington District and established a convict settlement which was called "Blackman's Swamp" after John Blackman. Percy had employed John Blackman as a guide because he had already accompanied an earlier explorer into that region.

In the late 1820s surveyor J. B. Richards worked on a survey of the Macquarie River below Bathurst and also of the road to Wellington. On a plan dated 1829, he indicated a village reserve, in the parish of Orange. Sir Thomas Mitchell named the parish Orange, as he had been an associate of the Prince of Orange in the Peninsular War, when both were aides-de-camp to the Duke of Wellington, whose title was bestowed on the valley westward, by Oxley.

Legal occupation by graziers began late in 1829, and tiny settlements grew up on the properties and in connection with the road. In 1844 surveyor Davidson was sent to check on encroachments onto the land reserved for a village, and to advise on the location for a township; the choice being Frederick's Valley, Pretty Plains or Blackman's Swamp.

Blackman's Swamp was decided upon and proclaimed a village and named Orange by Major Thomas Mitchell in 1846 in honour of Prince William of Orange. At nearby Ophir the first payable discovery of gold in Australia was made in 1851 which led to the Australian gold rush. Subsequent discoveries of gold in nearby areas led to the establishment of Orange as a central trading centre for the gold. This is contrary to the popular belief that gold was first discovered close to the nearby regional town of Bathurst.

The growth of Orange continued as the conditions were well suited for agriculture, and in 1860 it was proclaimed a municipality. The railway from Sydney reached Orange in 1877. In 1946, 100 years after first being established as a village, Orange was proclaimed a city. 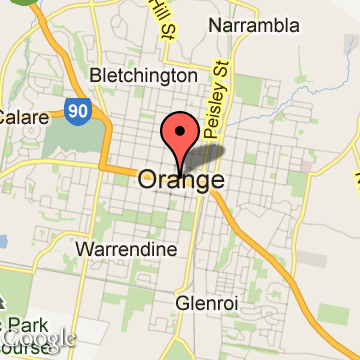