Kiama is famous for its blowhole. On the cliffs at Blowhole Point, waves surging into an underground cavity are compressed and forced upwards, exploding high into the air and accompanied by a loud 'oomph'. The strength varies according to the wind, waves and tides, and when it’s pumping, it always draws a crowd.Situated on Blowhole Point adjacent to the Visitors Centre, the Pilot’s Cottage Museum tells the story of Kiama’s colourful past, from the time of the cedar cutters to the basalt quarrymen and dairy farmers. Kiama Terrace, the row of weatherboard cottages along Collins Street, was constructed in 1886 to house quarry workers and their families. Don’t miss the Kiama Lighthouse. Nearby, Gerringong and Shellharbour are worth a visit.

Must See Places in Kiama, Australia

Kiama was the site of two strong volcanic flows, called the Gerringong Volcanics, which came out of Saddleback Mountain, now a collapsed volcanic vent. The Kiama Blowhole is part of an erosion process on the more recent rock, formed into columnar basalt, or latite. Before the cedar-getters (a rowdy mob of ex-convicts, convicts and runaways, some with cedar licences and many without) had even arrived in the area, around 1810, the local Indigenous Australians Wodi Wodi of the language group Dharawal had been using the land for thousands of years, moving every six weeks or so in family groups. This is supported by a midden of shells at nearby Bass Point used for more than 17,000 years. During this time the whole coastal hills was covered in rainforest and cedar brush. There is evidence of a flourishing culture with intricate possum cloaks, a developed song and story cycle and a deep understanding of the many plants of the rainforest. Only a few remnants of rainforest survive along the escarpment in places like the Minnamurra Rainforest Centre. There is strong evidence of recent sea debris showing a mega-tsunami hit this coast around 1487 A.D according to Dr Ted Bryant of Wollongong University. The first European to explore the area was George Bass who stopped there on his whaleboat voyage to Bass Strait on 6 December 1797. He noted the beauty and complexity of the Kiama area and was astounded when he first discovered the blowhole.During the colonisation of Australia, the Kiama area was settled by wheat farmers as the soil was volcanic and rain-swept unlike most of Australia. Early Jamberoo was the population centre from about 1830 to the 1860s and when the wheat died, the farmers switched to dairying. During this period Kiama became the best example of 'chain migration' in Australia as many assisted migrants came from Northern Ireland on clearing leases and eventually half the marriages in the Kiama Anglican Church in a hundred years had Northern Irish Protestant ancestry. Kiama was one of the birthplaces of the Australian dairy industry with the first Dairy Factory (The Kiama Pioneer Factory) and first Dairy Co-operative in Australia. There were three original major land grants, Thomas Surfleet Kendall (son of lapsed missionary Reverend Thomas Kendall), Michael Hindmarsh and Thomas Chapman, all of which married sisters of the Rutter family. The Kendalls were cousins of Henry Kendall, the famous Australian poet. The Kendall name is remembered today in several places such as the spooky Kendall Cemetery in Kiama Heights and Kendalls Beach. The Hindmarshs are remembered in Kiama's main park, Hindmarsh Park, and after 10 generations still live on their original land.Kiama's next real population boom was powered by its quarries. Many Irish Catholics worked in the Kiama quarries. The basalt formed by two volcanic eruptions 240 million years and 66 million years ago was a valuable commodity for a growing colony, with the blue metal used to pave Sydney's roads and as ballast for its railways. It was very similar to the basalt found in Northern Island, where the Giant's Causeway is a famous example. There are still active quarries in the Kiama area, including the N.S.W. Railway Quarry, and the remnants of earlier quarries are easily visible throughout the town and often have facilities built inside them such as the Kiama Leisure Centre. One particular quarry, the Bombo Headland, is of scientific importance as it is the site of the discovery (in 1926) of the longest known geomagnetic polarity interval called the Kiaman Reverse Superchron.When Kiama Harbour was hollowed out, after 17 years hard work, and flooded in 1876, larger steamers such as from the Illawarra Steam Navigation Company could enter and a flourishing sea trade followed. The Kiama Pilot's Cottage was finished in 1881 and the Kiama Lighthouse in 1887. Kiama really hit its boom time in this period, from 1890 until the Great Depression in 1927, when nearly all the quarries closed. It was a prosperous and happy time well recorded in the local newspaper, the Kiama Independent and the photographs of the Cocks Photographic Studio, two valuable resources which tell most of the Kiama story.Over time tourism and housing growth turned Kiama into a dormitory suburb (where people travelled away to work) and summer tourist spot. Kiama in 2009 is a tourism haven in summer, during which its population triples. The Kiama Pilot's Cottage is now a local history museum. 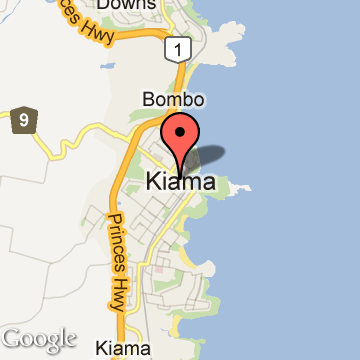