Gosford is known for its splendid natural setting, tourist attractions and thriving business industries. A mild climate, ocean beaches, bushland and forests as well as its proximity to Sydney and Newcastle have made Gosford a popular holiday destination and prosperous business centre. Don't miss visiting the Australian Reptile Park and see the amazing animals and displays.

Must See Places in Gosford, Australia

Until European settlement, the area around Gosford was occupied by the Guringai peoples, with the Guringai being principally coastal-dwellers.  Along with the other land around the Hawkesbury River estuary, the Brisbane Water district was explored during the early stages of the settlement of Sydney. In the early 19th century some pioneering European settlers began occupying the land, for timber-cutting (mainly ironbark and Australian red cedar), lime production and grazing.

Gosford itself was explored by Governor Phillip between 1788 and 1789. The area was of difficult access and settlement did not start before 1823. By the late 19th century the agriculture in the region was diversifying, with market gardens and citrus orchards occupying the rich soil left after the timber harvest. The first road between Hawkesbury, (near Pittwater) to Brisbane Water was only a cart wheel track even in 1850.

Convicts once lived and worked in the Gosford area. In 1825, Gosford's population reached 100, of which 50% were convicts.

East Gosford was the first centre of settlement. Gosford was named in 1839 after Archibald Acheson, 2nd Earl of Gosford – a friend of the then Governor George Gipps.

In 1887, the rail link to Sydney was completed, requiring a bridge over the Hawkesbury River and a tunnel through the sandstone ridge west of Woy Woy. The introduction of this transport link, and then the Pacific Highway in 1930 accelerated the development of the region.

Gosford became a town in 1885 and was declared a municipality in 1886. 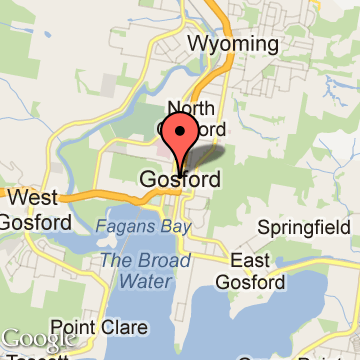