Grafton is famous for its jacaranda trees, which were originally planted in the 1870s by a local seed merchant by the name of Volkers, and the town is at its very best when the trees erupt in mauve blossoms in spring. There are 24 parks in Grafton with more than 6,500 trees.

Just east of Grafton, Yuraygir National Park is a sensational strip of coast teeming with wildlife. It also boasts pristine beaches, high dunes, paperbark lagoons, freshwater creeks that spill into the sea and some of the best coastal walking tracks in the State. Nearby, Yamba, Maclean and Iluka are well worth a visit.

Must See Places in Grafton, Australia

Before European settlement, the Clarence River marked the border between the Bundjalung and Gumbainggir nations, and so descendants of both language groups can now be found in the Grafton region.

Grafton, like many other settlements in the area, was first opened up to white settlement by the cedar-getters. An escaped convict, Richard Craig, 'discovered' the district in 1831. With the wealth of 'red gold' cedar just waiting for exploitation, he was given a pardon and one hundred pounds to bring a party of cedar-getters on the cutter 'Prince George' to the region. Word of such wealth to be had did not take long to spread and one of the arrivals was pioneer John Small on the 'Susan' in 1838, and he first occupied land on Woodford Island. 'The Settlement' (as the embryonic Grafton was then imaginatively named) was established shortly after.

In 1851, Governor FitzRoy officially named the town "Grafton", after his grandfather, the Duke of Grafton, a former Prime Minister of the United Kingdom. Grafton was proclaimed a city in 1885. Local industries include, logging, beef cattle, fishing/prawning, sugar, manufacturing and tourism is a growing part of the local economy.

The town is also known for its double-decker road/railway bridge, opened in 1932, completing the standard gauge rail connection between Sydney and Brisbane, and also forming a vital link for the Pacific Highway. This bridge is a one of a kind and is a major feature on the Clarence River in Grafton. 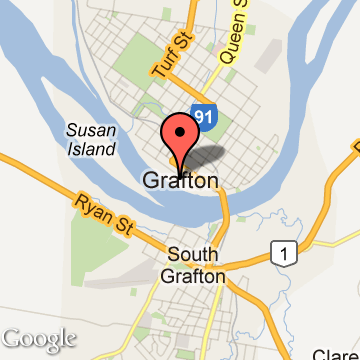