The main town of the Riverina, Griffith was developed in the early days of irrigation and designed by Walter Burley Griffin, the architect of Canberra. Today, there are more than a dozen wineries in the district with world-famous names. Griffith comes alive during La Festa, an annual event celebrating food, wine and cultural diversity held each Easter.Don't miss Pioneer Park Museum, featuring restored or replicated buildings from the early 20th century in a pretty 18-hectare bushland setting. Do the Two Foot Tour of town and see the city's historic buildings, or follow the blue arrows on a self-drive tour. At nearby Lake Wyangan, a world of water sports is on offer.

Must See Places in Griffith, Australia

Griffith was established in 1916 as part of the New South Wales State Government's Murrumbidgee Irrigation Area (MIA) project to supply irrigation from the Murrumbidgee river in western New South Wales to be used for farming. The main dam was the large Burrinjuck Dam between Gundagai and Canberra, which stored water to be released down the river for irrigation. Berembed Weir, near Narrandera, was built across the Murrumbidgee River, from which flows the Main Canal. The Canal, almost a river in its own right, flows through the MIA to Griffith, supplying water to the entire area, and petering out to the northwest of the city in rice farms.The water supply was further enhanced with the construction of the Snowy River scheme by the Australian Federal Government in the 1950s and 1960s. The Blowering Dam, a large dam near Tumut stores a significant amount of water to be released down the Murrumbidgee for irrigation around Leeton, Griffith and the newer Coleambally area south of the Murrumbidgee and Griffith.From the start of the MIA, citrus and other fruit and vegetables were grown in abundance around Griffith. In the 1950s the irrigation area expanded to include large rice farms. Vineyards were established early, and wineries followed, beginning with McWilliams wines at Hanwood and Yenda, two villages just outside the city.From its earliest days, the MIA was populated by Italian workers, some of whom were initially employed by Australian farmers to run steamboats on the Murrumbidgee and Murray Rivers. Approximately 60% of today's Griffith population claim Italian background. These include the initial settlement of Italians from the boat crews and other Italians who came out to Australia in the Depression, or from a second wave of immigrant Italians who came to Griffith in the late 1950s and early 1960s.In the 1970s, Griffith was often associated with drug distribution (particularly marijuana) and organised crime, as depicted in 2009 by Underbelly: A Tale of Two Cities. However, Griffith is now associated with good wine and food, primarily as a result of its diverse population, with notable contributions by Italian-Australians. Griffith's multi-ethnic population is now absorbing new national groups, including a significant Sikh Indian community. The city is sister city with the Italian city of Treviso in the Veneto Region. Many Italians in Griffith are from the Veneto Region or the Calabria Region of Italy.The Italian influence expanded the range of fruit and vegetables, and also significantly increased the number of wineries and the range of wines produced. De Bortoli, Rosetto and other wineries were established by Italian immigrants, and today they are well known around Australia. In recent times they have been joined by one of the country's best known wine labels, Yellow Tail, produced by Casella Wines.Griffith is the cathedral city of the Anglican Diocese of Riverina. The foundation stone of the Parish Church of St Alban the Martyr was dedicated in 1954. It was proclaimed as a cathedral in 1984. 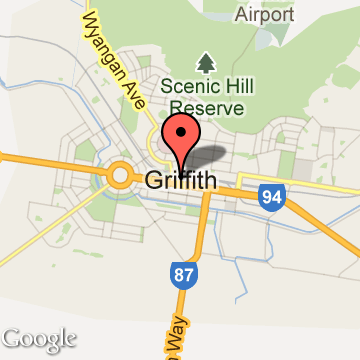