Lithgow is located in the foothills of the Blue Mountains, on the western side of the Great Dividing Range. It's a popular base from which to head further west into country NSW or to explore local national parks.

Lithgow has a number of fine public and private buildings, reflecting its key place in Australia's industrial history. Lithgow played a significant role in the shaping of Australian commerce and industry in the 1880s; find out more about the town's heritage on a self-guided walking tour. Other things to do nearby include exploring Lithgow State Mine Heritage Park and Railway, fishing at Lake Wallace and visiting historic Esbank House Museum.

Don't miss the spectacular Glow Worm Tunnel at Newnes Plateau near Lithgow. Located within the World Heritage-listed Wollemi National Park, the Glow Worm Tunnel area offers magnificent views of pagoda rock formations, extensive flora and a wide array of native wildlife including glow worms, kangaroos and wallabies. The walk into the tunnel follows a disused railway line, which once descended into the Newnes Valley, and was used to transport oil shale. Make sure you take a torch with you to see the thousands of glow worms that inhabit the tunnel.

Hassans Walls Lookout, near Lithgow, is the highest in the Blue Mountains. Admire to Mt Wilson, Mt York, Mt Tarana and Mt Blaxland as well as the pretty Hartley Valley below. To the south are the Kanimbla and Megalong valleys and Mt Bindo. While there, go for a walk or ride around the lookout.

Must See Places in Lithgow, Australia

The mountainous terrain of the Blue Mountains and the expense of building long tunnels required the construction of The Great Zig Zag railway between 1866 and 1869. The line was opened as far as Bowenfels, just to the west, in 1869, but Lithgow station was not opened until 1877. Although it was superseded in 1910 by more modern engineering methods, including ten tunnels, parts of the Zig Zag have been developed into a popular tourist attraction.

The town is the centre of a coal mining district and there are two coal-powered power stations nearby. It is the site of Australia's first commercially-viable steel mill,  the ruins of which are open for inspection at "Blast Furnace Park".

Due to the abundance of coal and relative proximity to Sydney, in the areas surrounding Lithgow are two of the largest power stations in NSW, the Mount Piper and Wallerawang power stations. Both are operated by Delta Electricity.

Lithgow has many heritage sites. The following are listed on the Register of the National Estate:

Methven, Lidsdale Road, a sandstone house built by Andrew Brown in the 1870s

Lithgow was also the location of an alleged assassination attempt on the life of Queen Elizabeth II in 1970. 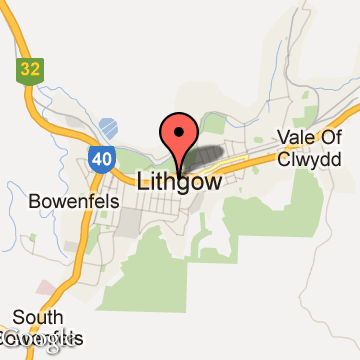