Learn about Australia's pioneering history on a heritage walk, at an historic homestead, Victorian-era goal or modern cultural centre. Old Dubbo Gaol is now a museum and chilling reminder of Victorian-era prison life.

Enjoy local produce including the red and white wines of this emerging wine region.

Must See Places in Dubbo, Australia

Evidence of habitation by Indigenous Australians dates back approximately 40,000 years.

The explorer, John Oxley, was the first European to report on the area now known as Dubbo in 1818.  The first permanent settler in the area was Robert Dulhunty, described as one of the wealthiest citizens in the Australian colony at the time. There are records of squatters being given permission to set up large sheep and cattle stations in the area in 1824 but these were not maintained.[citation needed] Dulhunty occupied a property, known as Dubbo station (established in 1828),  from the early 1830s on a squatting basis. With the passing of the Squatting Act in 1836 he took out a licence on the property.

Dulhunty showed an affinity with Indigenous Australians, his party included some 40 Aborigines and he favoured using Aboriginal names for properties, including Dubbo. Dubbo is now thought to be a mispronunciation of the local Wiradjuri word "Thubbo" but because of a lack of precise records from Dulhunty at the time and an incomplete knowledge of the Wiradjuri language today there is some conjecture over the word's meaning. A popular current theory is the word means "red earth," consistent with the local landscape. It is also possible that Thubbo or Tubbo is Wiradjuri for "head covering"  – a theory put forward to support this name is that the shape of Dulhunty's house may have looked like a hat to the local people.

Dundullimal Homestead is a farmhouse from that period, built around 1840 by John Maugham on his 26,000-acre (11,000 ha) sheep station. The building is one of the oldest homesteads still standing in western NSW and today is open to visitors.

Due to the lack of title for the land, in 1848 the storekeeper, Jean Emile Serisier, organised a petition asking for a land sale of town allotments. The plan was presented to the colony's Surveyor General in May 1849 by surveyor G. Boyle White.  The settlement was gazetted as a village in November 1849 with the first land sales taking place in 1850.  Population growth was slow until the Victorian gold rush of the 1860s brought an increase in north-south trade. The first bank was opened in 1867. Steady population growth saw the town proclaimed a municipality in 1872, when its population was 850. The railway extension of the main western railway from Wellington to Dubbo was formally opened on 1 February 1881.    By 1897, Dubbo had a general store, Carrier Arms, a slab courthouse, a gaol and a police hut. The final section of the Molong to Dubbo railway opened in late May 1925.

Dubbo was officially proclaimed a city in 1966. 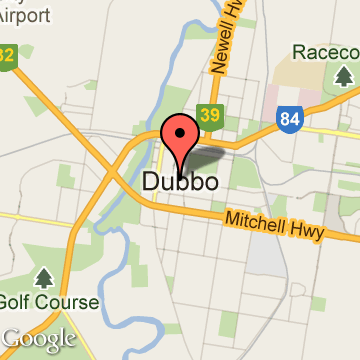