Margao is the headquarters of South Goa District and is regarded as the main commercial city of Goa. It is famous for its ancient cultural heritage and traditional customs of the people of Goa. It boasts of fine gardens, parks as well as imposing old mansions and modern buildings. Its commerce and alive with culture, the discerning tourist cannot but get caught up in the currents of Margao. Nestling on the banks of a tiny stream, Margao's River Sal, this riverine city of Goa. Margao is known for its bazaars and restaurants, bus stands and railway stations. The picturesque Colva beach is just 5 km away from Margao. You can also shop during the day or laze at the beaches around Margao. Margao evolved from 'Matha-gram' when various monasteries followed in the medieval period, and how the name gradually changed from Madgaon to its current monicker, because the Portuguese were not very comfortable with hard syllables.

The most important town in South Goa connected by rail and the national highway with Karnataka and Maharashtra and located in Salcete is Margao. The commercial capital of Goa, Margao is also the second largest city of Goa. It seems that this town had many Hindu temples and Dormitories. In fact it is believed that the name Margao is the corrupt version of Mathgram, which means the a village of dormitories. Margao has an old-worldly charm about it because of its Portuguese churches, and some magnificent specimens of old Portuguese houses. The Church of the Holy Spirit as dominates the entrance to the city. The church was built by the Portuguese in 1675 and is one of the finest examples of late-Baroque architecture in Goa. The church area is surrounded by beautiful old residential houses still in pristine condition. It is the gateway to the southern beaches of Goa.

The city of Margao is surrounded by some beautiful villages and climate of this town is very good. Margao is laced with good accommodation for the connivance of the tourists. This town is well-known for its old cultural heritage, stunning nearby beaches, traditional customs and warm & friendly people of Goa. This city is well-linked by railway network from major cities and towns of India. Some major attractions of Margao are Portuguese Churches, the Holy Sprit Church, Keserval Spring, Hari Mandir, Colva Beach and Damodar Temple.

Must See Places in Margao, India

Margao was known as Madgaon before the Portuguese settlement. Ancient Margao was home to the Vaishnavas before the settlement of the Portuguese colonizers and there were a number of hindu temples here. The earliest settlers used to reside around the Damodar Temple which was later brought down and the Holy Spirit Church was made in its place. During the Portuguese rule of Goa many Hindus migrated out of the area to other parts of India. Hindu temples were destroyed and Christianity became the main religion. Those who stayed back were forced to convert to Christianity.

It was one of the major trading cities under the Portuguese and was known to be the administrative and commercial center. 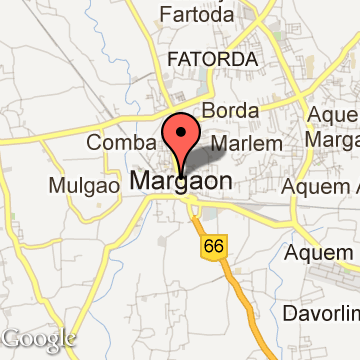