Till few years back, before the beach resorts had not made their foray on Colva beach, it was an easy escape for those seeking ultimate solitude. Thankfully, the development in the past few years has been pretty fast paced making Colva southern Goa's main tourist beach. Nevermind the activity, Colva still has miles of virgin territory laced with soft white sand for you to explore.

Colva is forty kilometres from Panaji, the Goan capital and two kilometres from Benaulim. Adjacent to Colva is its secret suburb, Sernbatim beach. Longest among all beaches in Goa, Colva stretches twenty kilometres along the Arabian sea, about six kilometres west of Margao. Lined with coconut palms throughout, Colva has Bogmalo in north and Cabo de Rama in south. In the pre colonial era, Colva had the honour of being the retreat zone of Margao's high society. While speaking of history of Colva, the name of Our lady of Mercy Church invariably comes up. More about the church in the later paragraphs.

While at Colva one can also see the beautiful houses and villas that dot the village. Another interesting thing about Colva is its popularity among the locals. Though the beach is fairly famous with foreign and Indian tourists, it is the locals who can be seen here in large numbers.

Things to see and do
Colva is god's perfect gift for those who seek solitude in their holidays. Colva offers you with something no other beach offers. Miles and miles of virgin territory comprising of white soft sands, shining sun and the music of waves playing by. Though commercialization is gradually taking roots in Colva, yet with its long stretch it still seems and remains less crowded.

While at the beach
Laze, laze and laze. There is no end to that. Grab your favourite books, tie your swinging net between two coconut trees in a peaceful place and treat yourself through the day.

When in season (November to May) seafood restaurants sprout in large numbers on the main beach area. If you have deep pockets, than don't give any second thoughts, just enter and you will have the most romantic evening. With tablecloth, candles, soothing music and large portions to gorge on, you will not complain. And for budget tourists there are plenty of offers in the shacks. You will get excellent pasta and steak, varieties of Goan prawn curry. Swimming in Colva is another passtime.

Colva is fairly safe place to make a splash in water but don't venture in deepwaters unless you are a strong swimmer. Indulge in some trinket shopping or start collecting seashells and make your own collection. Though not in line with established rave party venues like Anjuna, Colva doesn't actually disappoints its visitors. There are few places where you can catch up with the party scene.

Water sports
Water sports on Colva beach comprises mainly of jet skiing and speed boat rides. For speed lovers jet skiing is the sport. The machine is very simple to handle but mostly an instructor accompanies rider. Next to jet skiing in terms of speed is the speedboat ride. It is a group activity comprising three to six people. So go ahead and explore the Goan coastline.

This church is very famous in Colva and has a religious history attached to it. The church has a statue of Child Jesus placed on the altar. The statue its believed to be imbibed with gifting powers. The staue was discovered by Fr. Ferreira in 1640 in the coast of Mozambique. In 1648 Fr. Ferreira brought it to Colva and placed in the church. Since years now, on second Monday of October Fama festival takes place every year. The festival and grand feast along with the fair that follows attracts thousands of locals and is popular with tourists as well.

Bull Fighting
This promises to be a funfilled experience with loads of excitement and local humour in the air. On the beats of Konkani music, you can witness a bullfight from early October to late May. These fights usually take place in old rice fields with no barricades.

Must See Places in Colva, India

Colvá was a vast barren land with a beautiful Arabian Sea beach that had beach plants such as scaevola sericea and a land that had no human settlement until a few Goud Saraswat Brahmin were first to settle on this land as migrants as majority of them had migrated, settled and lived in the village of Benaulim, which is the neighboring village. The mughals, the people of Adil Shahi dynasty preferred the north and the hilly regions of Goa (where they built forts and defense) rather than settling by the coastal belt and hence had not touched the barren land of Colvá. It was the Portuguese conquest that established the western regions of South Goa as a full fledged human settlement and developed it to the fullest. This village was under Portuguese conquest and further Provincial administration as a Province of Portuguese-Goa from 1510 until 1961 (was under dispute till 1974/75 and represented in the Parliament of Portugal) and was the village of the Portuguese Roiz family, the descendants of D.Diogo Rodrigues and its villagers. The village belonged to D.Diogo Rodrigues from 1550 who was the Lord of Colvá (Landlord of Colvá) . He built the first Portuguese architecture residential house in 1551 facing the opposite side of the sea and at a distance from the shore, this was tactfully done to avoid any enemy attacks from the Arabian sea. The entire beach called praia da Colvá belonged to him. In the 18th century, one of Diogo's decedents namely Sebastião José Roiz ordered his village people to plant coconut trees on the entire coastline, the villagers thought it was foolish as the soil was white (in-fertile) and would not sustain the plantation growth. However today the shore line is a serene beauty of those plantations of coconut trees. The entire Colvá shore and beach property till betalbatim was inherited by various descendants of the Roiz family until the late 20th century after which parts were handed over to the Government of Goa under Indian administration post 1974/75 settlement of Goa, as Colvá was annexed as a part of Goa during the 1961 annexation of Goa by India and the rest of the land was sold.
Igreja de Nossa Senhora da Piedade

Colvá is still famous for the white washed Our Lady Of Mercy church also known as Igreja de Nossa Senhora da Piedade that was founded in 1630 and later rebuilt at the village square in the eighteenth century. It houses the miraculous statue of 'Menino Jesus' (Baby Jesus) which is believed to have healing powers that was founded by a Jesuit missionary. According to local legend the statue at Our Lady of Mercy church was found in the mid-seventeenth century in the coast of Mozambique, when Rev Fr. Bento Ferreira and his party had been shipwrecked off the coast. After swimming to safety they spotted it as it was washed ashore after being dumped by Muslim pirates into the sea. In 1648 when Father Ferreira was posted to Colvá he placed the statue on the altar and it soon started drawing large crowds of devotees as it granted their favors. The Menino Jesus statue is kept for public viewing in October for the annual Fama ('Fame') festival for which thousands of people assemble. This is the only time that it is removed from the triple vault locks of the Church. It is then dipped into a nearby river after a procession and the pilgrims use this water for anointment and good luck. 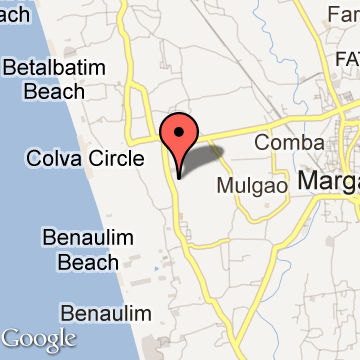