Located in the blossom of green mountains with perennial falls and streams, Kullu’s beauty is dear to the people visiting this wonderful town in Himachal Pradesh. The Valley of Gods, as the Kullu Valley has come to be known, is located at an altitude of 1220m above sea level and allures a large number of tourists.

Situated on the banks of the river Beas, the place is also famous destination for the honeymooners who visit this place in great numbers. It is the ideal destination to beat the heat of the plains. Dotted with several shrines and an excellent base for a number of treks, Kullu is known for the Dussehra festival that attracts visitors from across the world.

Must See Places in Kullu, India

Kullu (1,220 m or 4,000 ft) was once known as Kulanthpitha - `the end of the habitable world`. Beyond rose the forbidding heights of the Greater Himalayas and, by the banks of the shining river Beas, lay the fabled "Silver Valley".

The Chinese pilgrim monk Xuanzang visited the Kullu Valley in 634 or 635 CE. He described it as a fertile region completely surrounded by mountains, about 3,000 li in circuit, with a capital 14 or 15 li in circumference. It contained a stupa (tope) built by Ashoka, which is said to mark the place where the Buddha preached to the local people and made conversions, stupa was taken away by a mughal ruler and put in feroz shah kotla maidan in Delhi. There were some twenty Buddhist monasteries, with about 1,000 monks, most of whom were Mahayanist. There were also some fifteen Hindu temples, and people of both faiths lived mixed together. There were meditation caves near the mountain passes inhabited by both Buddhist and Hindu practitioners. The country is said to have produced gold, silver, red copper, crystal lenses and bell-metal.

Kullu got its first motorable access only after Indian Independence. The long centuries of seclusion have, however, allowed the area to retain a considerable measure of its traditional charm. The road through the Kullu Valley and Lahaul is now paved all the way, to connect and provide the major access route between the northern Indian plains to Leh in Ladakh.

Further information can be read at http://hpkullu.gov.in, The Official Website of Kullu District. 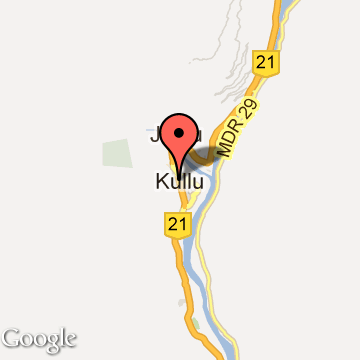