Sprawled lazily along the bank of the Sungai Sarawak, state capital Kuching has a leisurely charm all its own, cultivating a sophisticated but relaxed atmosphere where high-rises tower over traditional river ferries and souvenir shops rub shoulders with bird’s-nest traders. The name means ‘cat’ in Malay, and a distinct feline langour characterises Kuching life, as if the city might at any moment stretch, stir and slink off on its own mysterious business.

Built principally on the south bank of the Sungai Sarawak, Kuching was known as Sarawak in the 19th century. Before James Brooke settled here, the capital had been variously at Lidah Tanah and Santubong. Kuching was given its name in 1872 by Charles Brooke.

Unlike some of the other large towns in Malaysian Borneo, Kuching’s historic buildings escaped damage during WWII, and many have been tastefully renovated. Like the state it represents, modern Kuching enjoys an admirable level of racial, re­ligious and social tolerance, partly thanks to a long custom of intermarriage. Even the local branch of KFC only employs speech- and hearing-impaired staff.

Although Kuching is quite a large city, the centre is compact and isolated from the suburbs by the river. Landscaped parks and gardens along the river promenade provide territory for strolling and atmospheric views of the Bungo mountains looming out of the morning mist. Combined with the city’s cultural attractions and the lively eating and drinking scene, it’s small wonder that no-one ever complains about spending a few extra days here. Once you do get around to leaving, Kuching is the best base from which to start exploring the state.

Must See Places in Kuching, Malaysia

Kuching is the third capital of Sarawak, founded by the representative of the Sultan of Brunei, Pengiran Indera Mahkota in 1827. Prior to the founding of Kuching, the two past capitals of Sarawak were Santubong, founded by Sultan Pengiran Tengah in 1599, and Lidah Tanah, founded by Datu Patinggi Ali in the early 1820s.

Sarawak was a part of the Sultanate of Brunei before it was ceded to British adventurer James Brooke, who ruled it as his personal kingdom from 24 September 1841. The official declaration was not made until 18 August 1842. Brooke took over as a reward for helping to bring about a peaceful settlement facing Bidayuh uprising against the Sultan of Brunei.

Kuching became the seat of the Brooke government and underwent remarkable changes. As the administrative capital, it was the focus of attention and development. Some of the first things James Brooke did was to introduce a code of laws and build his residence on a site at the northern bank of the Sarawak River.[citation needed] The present-day Astana (Palace), which is now the official residence of the Governor of Sarawak, is next to the original Brooke building.

Under James Brooke, piracy and headhunting were banned and law and order enforced. However, Kuching remained cramped and lacking in facilities. It was not until 1868 when Charles Brooke became the Second Rajah that greater efforts were made to upgrade the town. Drainage was improved, new buildings and streets sprang up and old shophouses were replaced with brick ones.
The Brooke Administration was given the status of Protectorate under Rajah Charles Brooke's rule and was placed behind the Indian Rajas and Princes. By the end of the Charles Brooke rule, Kuching had grown from a small ramshackle place into a town with attractive Victorian-styled Government buildings and telecommunication service. Sampans (small boats) and trains were the primary mode of transport.Kuching continued to prosper under Charles Vyner Brooke, who succeeded his father as the Third Rajah of Sarawak. In 1941, Kuching became the venue of the Brooke Government Centenary Celebration. A few months later, the Brooke administration came to a close when the Japanese occupied Sarawak. 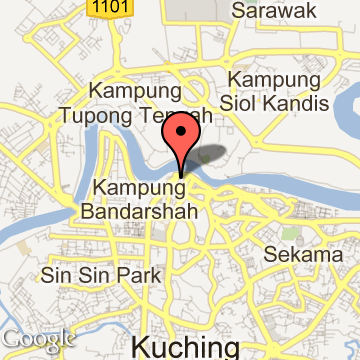