Whenever you find profitable resources, there are riches to be made. In Klang there was plenty of tin to be had. And the opportunists moved in. Tin had been mined by the Malays for centuries. The Chinese later introduced more efficient techniques to tin mining. And the British supported the industry relentlessly to feed the voracious needs of its Industrial Revolution.

As all other places where tin was found, Klang flourished. Infrastructure sprouted and roads were built. Britain invested benevolently and wisely. The excavated tin must find their way to the ports en route to Great Britain.

Meanwhile, tension amongst the locals brewed and seethed. Two local chieftains of Klang, Raja Abdullah and Raja Mahadi, fought for supremacy over the tin trade. Their Chinese allies backing them strongly. It was no surprise that Civil war erupted in 1867. It was unavoidable. For seven years, Malay soldiers wielding Kris and spears fought alongside their Chinese counterparts armed with their long menacing swords. Onslaught after onslaught assaulted and dominated besieged forts. One of the forts still stands; Kota Raja Mahadi was the stronghold of Raja Mahadi . Sadly today, all that remain to be seen are the main gate and the earthen ramparts. And that is if you can find it. After a lapse of an industrious century, development and tropical weeds and creepers brutally camouflage its pitiful existence.

The two warring sides called in aid from outsiders. The loss proved to be truly theirs. The year following the end of the Civil War, a British Resident was appointed to oversee matters in Klang, inevitably putting a stop to the era of the Malay chieftains' control over the proceeds of tin.

Must See Places in Klang, Malaysia

The royal town of Klang has been a site of human settlement since prehistoric times. Bronze Age drums and other artefacts have been found within the town itself and within the vicinity. Commanding the approaches to the tin rich Klang Valley, Klang has always been of key strategic importance.

The celebrated Tun Perak, the Malacca Sultanate's greatest Bendahara, came from Klang and became its territorial chief. After the fall of Melaka to the Portuguese in 1511, Klang remained in Malay hands, controlled by the Sultan Johor-Riau until the creation of Selangor sultanate in the 18th century.

In the 19th century the importance of Klang greatly increased by the rapid expansion of tin mining as a result of the increased demand for tin from the West. The desire to control the Klang Valley led directly to the Selangor Civil War (sometimes called the Klang War) of 1867–1874 when Raja Mahdi fought to regain what he considered his birthright as territorial chief against Raja Abdullah. Klang did not lose its importance, however. Until the construction of Port Swettenham (now known as Port Klang) in 1901, the royal town remained the chief outlet for Selangor's tin, and its position was enhanced by the completion of the Klang Valley railway (to Bukit Kuda) in 1886. In the 1890s its growth was further stimulated by the development of the district into the State' leading producer of coffee, and then rubber.

In 1901, it became the official seat of Sultan Sulaiman (Sultan Alauddin Sulaiman Shah). Today Klang is no longer State capital or the main seat of the Ruler, but it remains the headquarters of the District to which it gives it name. 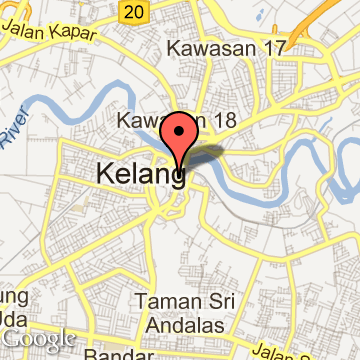