Jashpur district is divided in two parts as per the geographical point of views.The hilly belt, the northern part, running from Loroghat kastura,Narayanpur, Bagicha up to the Surguja district.This belt having forest area. It has a reserve forest also. It covers the Sanna, Bagicha and narayanpur. This pat area is called uppar Ghat. Upper ghat is climed through Loroghat. Loroghat is about 4 KM in length and  there are three turnings of very dangerous. And the remaining southern part is called nichghat. In jashpur raigarh  road, there are two more ghats, Jhanda bhat before Kansabel and Belaghat after Kansabel. Both are of climbing. The upper ghat is an extension plateau covering 1384 sq. Kms. Which is about 1200 meters above sea level and is covered with the dense forest. The elevated plateau called "Pat"   Nichghat is plane in general. But It also having many big mountains. Kunkuri is the hottest region in nichghat during summer and Pandrapat is the coldest region in uppar ghat in winter.

Must See Places in Jashpur, India

Jashpur, located on the western extension of Chhotanagpur Plateau, forms the north-east region of Chhattisgarh province. Deep, dense and extensive forests, a number of Streams and rivers originate, flow and supplement heavenly beauty to the country. In the past, the region was known as Yashpur, and later Jagdishpur and at present it is Jashpur.

An overview of the history shows specific features of the region. The civilization and cultural heritage are the total sum of man’s efforts and contributing impacts of natural surroundings. The topography and the soil of Jashpur contain rich bio-diversity, enough mineral deposits, well distributed drainage system, cool climate and honest, hardworking, peace loving work force. Nature has given everything generously. The people of the land express their gratitude to the nature with their contended attitude.

Khudia Rani and Gondwana Mahadev, the two archaeological sites, stand as witness to the fact that the region had been fertile for the development of civilization. Some forgotten and less known miraculous legends have also been recorded. Sculpture was a well developed art. An investigation into the history of the land reveals a rich and colorful tradition and culture of the people. It is the identifying distinction of the district.

Archaeological sites are significant in appreciation of history. In 18th century, Jashpur was among 14 princely States of Chhattisgarh, placed under Sarguja group. However, till 1905 it was under the administration of Chhotanagpur commissioner. It is painful to note that neither during royal regime nor there after any archaeological or historical Study and exploration was ever undertaken. A number of smaller mud-forts scattered around still wait for their scientific exploration. The prevailing mystery, if uncovered, could relate the archeological sites with the pre historic period of the country.

Jashpur region has been rich and prosperous with archaeological assets. However, excepting recent history of the princely State, no facts or figures, worth mentioning, are available. Some glimpses of the ancient past could be seen in the two literary works. “The Chhattisgarh feudatory States Gazettier” published in 1909 and written by EMD Brett and ‘Jharkhand Jhankar’ a work for literature by Deewan of Kanker Raghuvir Prasad, do mention some facts about the history of Jashpur. No other source has been found so far. Scattered around various parts of the region, one can find remains of idols, statues, and ancient places of worship in their dilapidated state. No sculptures, carvings scripts or paintings to provide information about the places of archeological importance are available. 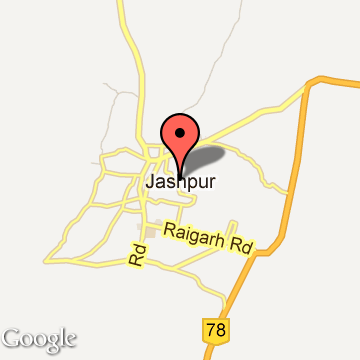