Bastar is held in high esteem for its beautiful rivers, exotic mountains and valleys, lush green forests, diverse wildlife, natural caves and enchanting waterfalls. Apart from the picturesque beauty of this place, the captivating culture and ancient architectural monuments of Bastar are also major attraction for tourists. With so much to offer, it is quite natural to find the various Tourist Attractions in Bastar drawing heavy footfalls round the year.

You can enjoy countless things on your Tour to Bastar. The Monuments in Bastar would enthrall you for sure. The Kutumsar Caves, Bastar Palace and Kailash Gufa are some of the places worth a visit. You may choose Jagdalpur, Bastar's district headquarters to be your base to travel around this region. Some other places worth a visit on your Tour to Bastar consist of Danteshwari Temple and Anthropological Museum.

Must See Places in Bastar, India

Bastar and Dantewada districts were formerly part of the princely state of Bastar. Earlier studies of the region were conducted by Verrier Elwin a colonial anthropologist, who went native. The state is described in Nandini Sundar, Subalterns and Sovereigns. After Indian independence in 1947, the princely states of Bastar and Kanker acceded to the Government of India, and were merged to form Bastar District of Madhya Pradesh state. The district, which had an area of 39,114 km², was one of the largest in India.

In 1999, the district was divided into the present-day districts of Bastar, Dantewada, and Kanker, and in 2012 it was divided in one more distrct named as Kondagaon which constitute Bastar Division. In 2000, Bastar was one of the 16 Madhya Pradesh districts that formed a part of the new state of Chhattisgarh.

The Chitrakoot and Teerathgarh waterfalls are situated close to Jagdalpur. Bastar is famous for its traditional Dasara (Dussera) festival.

The Bastar Raj family claims its descent from the Pandu king ,Birbhadra of Delhi who was granted by the family goddess Dillishwari an arrow as his weapon of war .This Birbhadra subsequently moved to Mathura where he received a trident from the goddess Bhuwaneshwari .Then he moved on to Jeypur (Orissa) with the family goddess.Later on they settled at Warangal with Manikya Devi (or Danteshwari as she is called in the Bastar inscriptions),their family goddess, who granted them a sword when they moved into Bastar.All these weapons are still in existance and are even now worshipped.

The Kakatiyas were great patrons of learning and the great commentator Mallinath flourished under their patronage.The great Kakatiya King Pratap Rudra's brother , Annam Deo , left Warangal and established his kingdom at Bastar,after 1424 A.D.After Annam Deo ,Hamir Deo had been succeeded and then Pratap Raj Deo .The Pratap Raj Deo is said to have conquered 18 forts around Dongar and assigned them to his younger brother as a maintenance grant.It seems that within three generations of this event the Bastar branch of the family became extinct ,and then after both Donger and Bastar came under Rajpal Deo.

Rajpal Deo had two Ranis, Baghelin and Chandelin.By the first he had a son named Dakhin Singh and by the second two sons namely Dalpat Deo and Pratap Singh.The Baghelin Rani was very jealous of her Co-Rani and her sons.When Rajpal Deo died ,she managed to place her brother on the throne and there by ousting the legitimate claiment Dalpat Deo, who had to leave Bastar for the time being and take shelter in the Jeypore Kingdom. Subsequently he managed to win over the Bastar Court people to his side and with their help he occupied the Bastar throne. 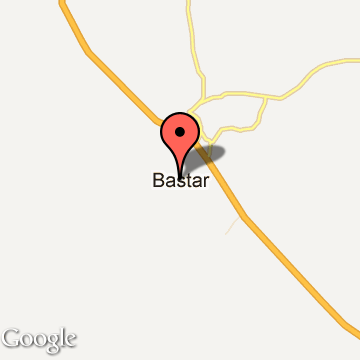