Durg is a city in Chhattisgarh state, Central India. It is just east of the Seonath River (Shivnath River) and is part of the Durg-Bhilai urban agglomeration. The city is an agricultural market and is heavily engaged in milling rice and pigeon peas. Durg gained importance as an industrial centre after the establishment of a large steel plant at Bhilai. Industries include brass working and bell-metal working, oil pressing, mining, and weaving. It is the headquarters of Durg District, the third largest district of Chattisgarh.

Must See Places in Drug, India

In ancient times Durg was part of 'Dakshina' or 'Southern Kosala'. In the epic 'Ramayana', King Dasharatha Of Uttara Kosala married Kosalaya, the princess of Dakshnia Kosala. The Chinese traveller Huien Tsang visited Southern Kosala in the 4th Century A.D. He mentions that he found an Asokan tope in the Capital city. It is therefore apparent that the District was included in Ashoka's Empire. Álso in the 5th century AD, we get an authentic reference to this tract, in the famous Allahabad Pillar Inscription of Samudra Gupta. He claims that two kingdom Kosala and Mahakantara, succumbed to his southern expedition.

However, the first specific reference with regard to the word "Durg" comes around the 8th century A.D. through two stone inscriptions; which were found in Durg and later deposited in the Raipur Museum. The First inscription mentions the name of a king Shiva Deva. The 2nd inscription associates the name of Sivapura (the capital of Shivadeva) with that of Shiva Durga, indicating thereby that during Shivadeva's reign the town and the fort were separate. The present name "Durg" is evidently a contraction of the old shivadurga, which he built. The river on whose banks stands the present town is also called "Shiva River". With the coming of the Kalachuri dynasty of Tripuri in A.D. 1182, Durg came under their kingdom. From then on it remained under the Kalachuries, till 1742 A. D. when the Marathas deposed them.

In 1877, after the Marathas lost the IIIrd Anglo- Maratha War, the tract of Chhattisgarh passed into British hands. Caption Edmonds was the First British Officer posted in Chhattisgarh as Collector and Magistrate to carry on the administration. For the purpose of Administration Durg was attached to Bhandara District (now in Maharashtra) but in 1857 it was separated and made into a tehsil of Raipur district to which it remained attached till 1906. 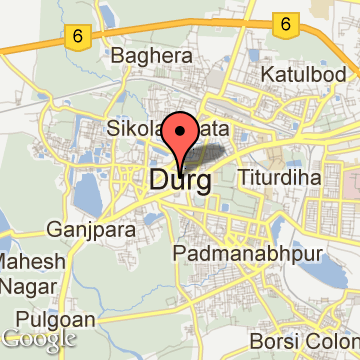