Office of the Collector

The hypnotic land of Daman with its sun-kissed beaches, marooned location, opalescent waters, ornate architecture and tropical flavor exudes an unsurpassable charm. With its myriad visual delights, the place is a favorite holiday destination among tourists from all over the globe. People regale in its bounty, far away from the cacophony and razzmatazz of cities. Be it watching the sunset by the seashore; making sandcastles in the golden sands; basking in the pleasant weather; enjoying various water sports; or just gamboling around; the singularity of Daman stands out from every corner of its landscape.

Daman gratifies the whims of sun bathers and swimmers at its beaches, the historic churches with finely carved statues, majestic forts that rise in their imposing splendour, coconut groves, abundant greenery and round the year temperate climate all provide a lovely escape for those in search of bliss, happiness and fun far away from the bustles of city life. Being a port town, it offers an exquisite variety of sea food, fare to satisfy the demanding palates of fish lovers, while the quaint bars and sea side modern restaurants satisfy the pleasure of life. The friendly and hospitable people, Hindus, Christians, Parses and Muslims all living in harmony here on this exquisite pearl on the west coast compel visitors to come again and again.

Must See Places in Daman, India

The edict of the Emperor Ashoka (273 to 136 B.C) was found in Saurashtra and Sopara near Bombay. Satrya Kshatrapas under the Kushana emperor seemed to have ruled over Daman District during the first century, A.D. The Coins of Bhumaka and Nahapan, the kshaharata rulers were discovered in the surrounding areas of Surat District. Ushavadatta, son-in-law of Nahapan, is said to have provided ferries on rivers Dhanuha Dhamana, Parada and Tapi.

This is the earliest reference of these rivers and the names of the places, i.e. Dahanu, Daman and Pardi, remained unchanged for the last 2000 years. The District seems to have been subjected to the rule of Gautamaputra Satakarnin, about 125 A.D., who drove away the Kshaharatas. But Satavahana's rule was short lived.

Rudraman I, grandson of Chastan of Kadamaka branch of Kshatrapas reconquered a large part of Western India including the sea-board from the river Mahi in Gujarat to Ratnagiri by about 150 A.D. from Satavahana ruler, Satakarni, and Daman district again passed under the rule of Kshatrapa Vijayasen (234-239 A.D.) who seems to have ruled over the district till 249 A.D. Abhir king Ishwarasena of Nasik, who conquered the western part of the Deccan from the Satavahanas seems to have been laid by Gautamaputra Yajnashri, campaigns the Kshatrapas from 180 to 200 A.D.

Govinda III handed over the Lata kingdom to his brother Indra about. 808 A.D. and was given the title Lateswaramandalasya or the protector of Latamandala. Indra was succeded by his son Karka who seems to have ruled Latamandala with his brother, Govinda jointly till A.D. 826. Druva II, son of Karka came to the throne about 835 A.D. and was succeded by Akalavarsha in. 867. A.D. The District was passed to Tailappa II of the Chalupas of Kalyani in 973 A.D. Tailappa II placed Lata Country in the hands of his relative and general Barrpa alias Dvarappa Chalukya. By the middle of the 13th century, a Rajput prince Ramsingh alias Ramashah seems to have defeated the koli chief Nathorat and established himself in the hilly tract at Asheri of Asserseta near Daman about 1262 A.D. Ramsingh was succeded by his son Somanath in 1295 A.D. The newly founded Ramnagar at the foot of the ghats flourished under Somnath (1335-1360 A.D) and Daram shah (1360-1391 A.D.). Jagatshah succeeded Gopushah and ruled during 1432 A.D. to 1470 A.D. The Portuguese from Shah of Gujarat acquired Daman. They noticed the port of Daman for the first time in 1523. A Portuguese enclave for 4 centuries and a half till the close of the colonial rule in 1961; Daman has been a coveted prize for which princes, monarchs and alien powers waged wars. Muted memories of history lie vaulted in the monuments of Daman. It had been a melting pot, where races and cultures met and mixed to bring forth a multi-coloured identity. 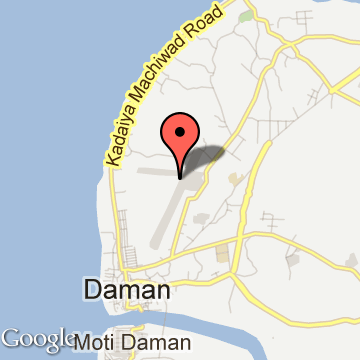