Take in a number of natural and contemporary attractions at picturesque Ocean Grove, a fantastic spot to enjoy the summer sun. Wander along the beautiful, wide surf beach, flourishing nature reserve or pick up local art pieces or gourmet produce at the upbeat shopping precinct. Explore the unbroken stretch of sand that reaches out to the mouth of the Barwon River and stop to enjoy surfing or swimming on the ocean beach.

In 1869 American Methodists established a permanent religious camp community on the coast at Ocean Grove, New Jersey, in the United States of America. It was so successful that they decided to spread their camps overseas, including to Australia. Following a collaboration with the Victorian Methodists, an initial camp was set up near Point Lonsdale. By 1882 they needed to acquire a larger area, so they could establish their Australian Ocean Grove community.

The site chosen was on the eastern side of the mouth of the Barwon River, overlooking Bass Strait.

In 1887, Charles James and James Grigg purchased, surveyed and subdivided land into 2,500 blocks bearing the covenant "no part of the above Land shall be used for the Manufacture or Sale of Malted Spirituous, or Vinous Liquors". The Ocean Grove Coffee Palace was built for the Methodist and Temperance Society, the first church service was held on 1 January 1888, and the population was such that a post office opened on 14 September 1888.

In 1927 the town was linked by the Barwon Heads Bridge to Barwon Heads on the other side of the river, previous access being by rowboat.

Many streets are named after important people in the old Methodist community, while the local youth camp was run by the Methodist church from the 1920s until 1996. 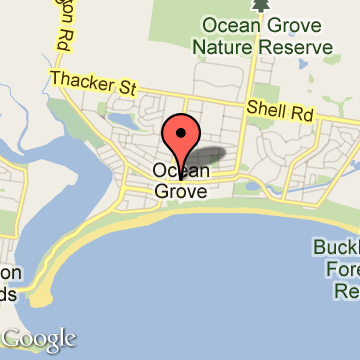