Go for the art, food and wine by bobbing boats at NewQuay, or shop up a storm and burn off some energy with the kids at Waterfront City.

Either way, you'll experience the beauty of Melbourne by the water, just five minutes from the CBD.

Savour cutting-edge modern Australian and international cuisine, take in stunning city views over a cocktail, or bring the family for a fun-filled day around the harbour.

Must See Places in Docklands, Australia

Before the foundation of Melbourne, Docklands was a wetlands area consisting of a large salt lake and a giant swamp (known as West Melbourne Swamp) at the mouth of the Moonee Ponds Creek. It was one of the open hunting grounds of the Wurundjeri people, who created middens around the edges of the lake.

At Melbourne's foundation, John Batman set up his home on Batman's Hill at Docklands, marking the westernmost point of the settlement. However, the rest of the area remained largely unused for decades.

The advent of rail infrastructure in the late 1860s saw the City's industry gradually expand into the area.

The earliest extensive plans to develop the area was in the 1870s, when a plan was prepared to extend the Hoddle Grid westward, following the curve of the Yarra River and effectively doubling its size. The plan proposed several gridlike blocks with an ornamental public garden and lake in the shape of the United Kingdom, occupying the site of the salt lake. However, expansion of the grid westward was abandoned in favour of a northward extension. 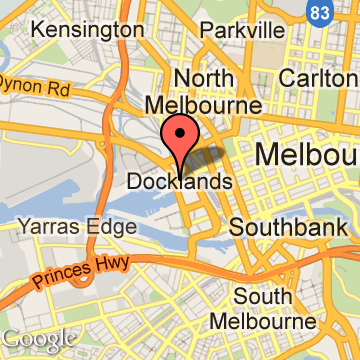