BAIRNSDALE Set along the Mitchell River, East Gippsland's only city, Bairnsdale is the western gateway to the wonders of the region. The Great Alpine Road provides a pictorial drive to the alpine regions of Omeo, Dinner Plain and Mount Hotham. The road to Dargo and the High Planes region Bruthen passes through the Mitchell River National Park, famous for canoeing and kyacking. Bairnsdale's modern shopping and commercial facilities are set amid many fine old buildings such as the Court House and St Mary's Church. The wide main street of Bairnsdale provides a garden atmosphere between the East and West bound lanes, popular for relaxing during a busy day's shopping.

The temperate climate is ideal to enjoy everything Bairnsdale has to offer. Such as year round water activities, bicycle and walking routes or explore the Aboriginal and European culture of the area maybe fill your days with visits to the aquatic centre, gymnasium, modern cinema and entertainment complexes, ten pin bowling, golf courses and archery. Bairnsdale is located just over three hours drive from Melbourne, its the perfect base to explore the lakes, rivers, mountains, coasts and forests of the region.

Must See Places in Bairnsdale, Australia

The Aboriginal name for Bairnsdale was Wy Yung (or Wy-yung), meaning spoonbill (a type of wading bird). Wy Yung is now the name for a suburb of Bairnsdale, located north of the town across the Mitchell River.

The current name was taken from the name of the property owned by pioneer settler Archibald Macleod, who took up the run on the west bank of the Mitchell River in 1844. Bairnsdale is probably derived from the name of Macleod’s family home on the Isle of Skye, Scotland, which had the name ‘Bernisdale’. An alternative interpretation was that Macleod returned after a long absence to find a number of ‘bairns’ (a Scottish term for babies) at the station. The name may in fact be a conjunction of these two stories, accounting for the transformation of ‘Bernis’ to ‘Bairns’.

The town site was surveyed in 1859, with the first blocks of land sold in 1860. Lucknow on the east bank of the river (named for the Indian city of Lucknow to which horses bred in the Bairnsdale area were sent to aid the British Crown during the Indian uprising), was already a thriving village. The Post Office opened on 2 February 1858 at Lucknow and was relocated to the township and named Bairnsdale on 3 April 1862.[3] Lucknow remains as a suburb of Bairnsdale.

Descriptions of Bairnsdale and its inhabitants in the 1920's feature prominently in The Watcher On a Cast-Iron Balcony, an autobiography by Hal Porter 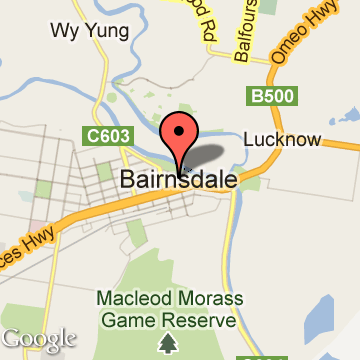