Meet camels and characters in Broome, an exotic pearling town that sits at the gateway to the Kimberley. Buy pearls and soak up the melting pot of nationalities in Chinatown, once the bustling hub of billiard saloons and opium dens. Ride a camel along the white sand of Cable Beach, the place to watch a blazing sun sink into the Indian Ocean. Check out dinosaur footprints preserved in rock and birdwatch from Roebuck Bay. Between March and October, you can catch the romantic magic of ‘Staircase to the Moon’, a silvery illusion created by the reflection of a rising moon.

Must See Places in Broome, Australia

Broome is situated on the traditional lands of the Yawuru people.The first European to visit Broome is often mistakenly thought to be William Dampier. But in 1688 he only visited the north of what was later named the Dampier Peninsula. And in 1699 he explored the coast from Shark Bay to La Grange Bay, from where he headed north leaving the Australian coast. Many of the coastal features of the area were later named for him. In 1879, Charles Harper suggested that the pearling industry could be served by a port closer to the pearling grounds and that Roebuck Bay would be suitable. In 1883, John Forrest selected the site for the town, and it was named after Sir Frederick Broome, the Governor of Western Australia from 1883 to 1889.In 1889, a telegraph undersea cable was laid from Broome to Singapore, connecting to England. Hence the name Cable Beach given to the landfall site.The town has an interesting history based around the exploits of the men and women who developed the pearling industry, starting with the harvesting of oysters for mother of pearl in the 1880s to the current major cultured pearl farming enterprises. The riches from the pearl beds did not come cheap, and the town's Japanese cemetery is the resting place of 919 Japanese divers who lost their lives working in the industry. Many more were lost at sea, and the exact number of deaths is unknown. The Japanese were only one of the major ethnic groups who flocked to Broome to work on the luggers or the shore based activities supporting the harvesting of oysters from the waters around Broome. They were specialist divers and, despite being considered enemies, became an indispensable part of the industry until World War II.Each year Broome celebrates this fusion of different cultures in an annual cultural festival called Shinju Matsuri (Japanese for festival of the pearl), it looks to celebrate the Asian influenced culture brought here by the pearling industry.Broome was attacked at least four times by Japanese aircraft during the Second World War, and the worst attack was the 3 March 1942 air raid  in which at least 88 people (mostly civilians) were killed.The West Australian mining boom of the 1960s, as well as the growth of the tourism industry, also helped Broome develop and diversify. Broome is one of the fastest growing towns in Australia.At Gantheaume Point and 30 m (98 ft) out to sea are dinosaur footprints dated as Early Cretaceous in age (approximately 130 million years ago). The tracks can be seen only during very low tide. Plant fossils are also preserved extensively in the Broome Sandstone at Gantheaume Point and in coastal exposures further north.Broome entered into a sister city agreement with Taiji, Japan in 1981 as historic ties between the two towns date back to the early 1900s, when Japan became instrumental in laying the groundwork of Broome's pearling industry. The annual dolphin hunt in Taiji was the subject of the 2009 documentary The Cove, and sparked a unanimous decision by the town's council, headed by Graeme Campbell, to end the relationship with Taiji if the dolphin hunt were to continue. The decision was reverseds in October 2009. 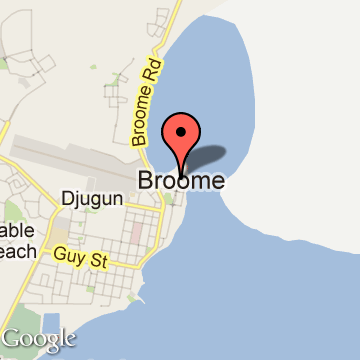